Audio - Doctor Who: The Silver Turk 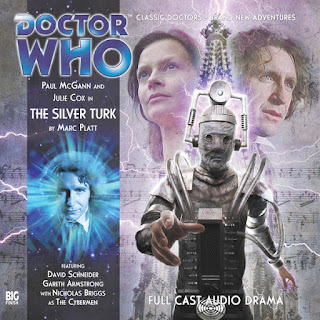 Our Doctor Who audio expert, Tony Cross, delves into the back catalogue available from the Big Finish website. Today is the Eighth Doctor and Mary Shelley adventure The Silver Turk..


This is an excellent story. It is brilliantly cast and brilliant creepy. It is also another great Big Finish Cyberman story.

I have talked often of how few good stories the Cybermen get in the Classic Series. I stand by that. It is astonishing to me sometimes that they are second only to The Daleks in terms of Doctor Who classic monsters but then I can see it is the potential of them that works on the mind. The memory that they were once like us. Time and circumstances removed that humanity. They have no emotion. Their blank eyes a symbol of the lack of soul. Their terrible desire to survive at all costs. To make us like them. There is horror here.

Occasionally the Classic Series delivers on that potential horror, but Big Finish have done it every time. Seen through Mary Shelley's eyes their almost humanity becomes pitiful. Only the Doctor knows what they really are and what they can do but he sounds brutal. The Doctor's tone is not dissimilar to that of the Ninth Doctor in 'Dalek'. Initially it appears to be the Cybermen that need protecting from him. Their battered, broken state making them appear in need of help rather than hatred. Mary Shelley's point of view gives us a chance to look upon an old enemy anew.

Of course in the end they are still just The Cybermen. Implacable enemies trying to survive.

These are Mondasian Cybermen and Nick Briggs brings back that sing-song electronic voice which makes them seem so freaky. It adds something to the story I think because it makes them seem more human and more sympathetic. The sing-song cry of pain that one of them gives at one point in the story is truly horribly sad.

I won't dwell too much on the plot as I don't want to spoil too much. Suffice it works for me, with everything coming together nicely at the end. Sort of. My only quibble is that the female parts are given as much depth as the male.

So Gareth Armstrong (formally of 'The Masque of Mandragora' ) is a magnificent evil son of bitch as Dr Johan Drossel. The final confrontation was wincingly horrifying. Then Christian Brassington does a fine job of Alfred Stahlbaum desperation to be someone and to hang on to what he has got beyond the point of sanity.
David Schneider gets to do light-relief almost jobsworth as cab-driver Ernst Bratfisch. Finally, Gwilym Lee does a neat job of Count Rolf Wittenmeier within the constraints of the part.

Poor Claire Wyatt though doesn't get much to do as the Countess Wittenmeier (Mitzi) except fret, fear and flap, which is a shame. There's a hint of steel there but it's never quite allowed out.

Julie Cox as Mary Shelley does get a lot more to do and it is nice to find a companion whose first run in with time travel, monsters and the potential of death has at least a few moments freaking out. It might all be all right in the end (rather too neatly perhaps) but there's a real culture shock here, which I like. Not every companion should settle right down comfortably straight away.

She also works quite well with Paul McGann's Doctor, who seems a little harder here than previously. Less excitable and more focused but I continue to feel comfortable with the Eighth Doctor. Even if his name dropping is reaching almost Pertwee proportions.

So well-worth a listen. In fact, if you want to get started with Big Finish this might not be a bad place to start but then I think almost any of their Cyberman stories is worth a punt (from what I've heard so far)