Audio - Doctor Who: The Witch from the Well 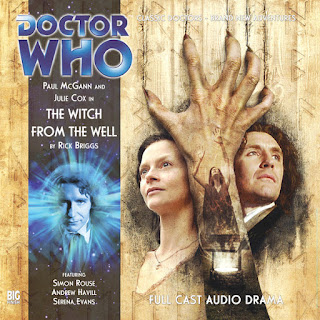 Our Doctor Who audio expert, Tony Cross, delves into the back catalogue available from the Big Finish website. Today is the Eighth Doctor and Mary Shelley adventure The Witch from the Well...

In the company of the Eighth Doctor and current companion Mary Godwin aka Mary Shelley.

The story begins with one of the less convincing moments of horror in Big Finish history but sets us up rather nicely. A horrid creature is released from the well by workman on behalf of Aleister Portillon (Andrew Havill) whilst in the woods a pair of teenagers - Finicia (Alex Wilton Regan) and Lucern (Kevin Trainor) are looking for something. Something important.

As usual the Doctor stumbles into things and decides to nip back to the 17th century to check out the causes of this mysterious 'Witch'. For their safety he brings Finicia and Lucern along, but they are clearly up to something significant.

The Doctor is rather patronising to Finicia and Lucern from the off. Indeed, his whole tone is a bit odd in the first couple of episodes. He's being rash, rude and rather stupid on occasions. Almost blasé about landing smack bang in the middle of a Witch trial he blunders about drawing more attention to himself than usual. He gets unusual treatment at the best of times but even the Doctor's not that oblivious to his surroundings. It's rather off putting really.

Anyway the Doctor and Mary get split up and unusually (and rather neatly) find themselves in two different time zones. The Doctor stumbling about the 17th century like a man determined to be executed and Mary in the 21st century looking for a solution to their problems, which are manifold, confusing and laden heavy with gobbledygook.

That's probably a bit unfair. There's lots of ideas here about an alternative and universally frowned upon energy which looks uncannily like magic. There's a whole cultural history and 'holocaust of witches' sketched out and laid before us but nothing is given room to breathe. There’re almost too many ideas here. It's bulging with them.

The Doctor is face-to-face with Witch-Pricker Kincaid (Simon Rouse) whose a bit of a cliché for the first two episodes, almost becomes three-dimensional in parts three and four but falls apart again. There's an interesting entwining of his story and that of the beliefs of the Veraxil (and I'm sorry that spelling could be total nonsense). Simon Rouse does a better job with the role than the character might deserve. He's especially skin crawly when he tells Squire Portillon (also Andrew Havill) that he's going to talk to his children, 'starting with his daughter'. However, he's a bit too light on the torture really for a man of his time and faith but it is hinted that he's rather squeamish, verging on the cowardly.

Kincaid and the Veraxil are different creatures doing the same task, ridding the Commonwealth of Witches. They just have distinct reasons for doing so.

There's an interesting thread buried in there about faith, perception and judgement.

There's a couple of heart-breaking moments in the last couple of episodes involving Mary and Aleister in the 21st century and the Doctor and Agnes in the 17th.

Mary, played with ongoing panache by Julie Cox, is tempted to find out about her future but resists. Initially I was a little worried that Mary was too focused on The Doctor being the only solution to her problems. However, once she realises, she's on her own, she's quite focused on sorting things out, aided by Aleister, who clearly has a bit of a thing for her by the end. Rather sweetly.

Also worthy of mention is Serena Evans, as Agnes Bates, the healer whose the initial target for the Witch-Prickers investigation. Evans helps raise her above the Blackadder wise woman territory into which, with the best intentions, she could have fallen.

Truth is this period of English history is horribly fascinating and difficult to understand for us in the allegedly enlightened 21st century. There's a story here worth telling but I think the writer has had too many ideas and not enough time in which to give them a proper airing, which is a shame.

That's not to say it is a bad story. It just doesn't quite work for me I'm afraid.