Audio - Doctor Who: Seasons of Fear 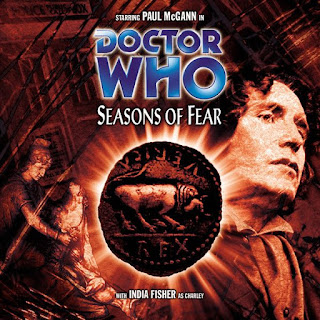 Our Doctor Who audio expert, Tony Cross, delves into the back catalogue available from the Big Finish website. Today is the Eighth Doctor and Charley adventure Seasons of Fear...


This, written by Paul Cornell & Caroline Symcox, feels very Moffatesque. The Doctor using time to trick his way around his defeat and (unseen) death at the hands of Sebastian Grayle.

Grayle is one of those Doctor Who villains who voice ends up oozing across the speakers like a posh oil slick. He's a tragic figure in some respects motivated by sulky greed - at least that's what it initially looks like - and love. He joins up with an unpleasant race of creatures called The Nimon who promise him immortality and power if he hands the Earth over to them. It's a focal point for their future conquests, which in the first episode appear to be a done deal but which the Doctor undoes bit by bit until it is Grayle who defeats Grayle.

Oh yes, there's a lot of timey-wimey stuff afoot here. I reckon you could quite easily plonk this into Season 7 with Matt Smith in it and Moffat's your uncle it'd fit right in.

There's some nice hops through time - from Roman Britain, to Edward the Confessor's court and finally to the Hellfire Caves of Wycombe in the 1800s. The latter episode produces some fine comedy as Charley attempts to bluff her way as an Austen-esque heroine. In fact, this does contain a lot of fine comedy as in my opinion that works better than the drama, which all seems rather repetitive in the end, almost as if the writers have been freebasing 'Frontier in Space.'

I'm probably one of a handful of people that likes 'The Horns of Nimon' so having them back was lovely. They make a fine villain for audio, being all mouth and no trousers so to speak but most of the villainy is carried out by Grayle. Who becomes increasingly evil at each point in his timeline? Immortality in Doctor Who never works out well for anyone and for Grayle it is the same. Indeed, by the end he's so horrible even his younger self can't stand him.

There's one or two plot contrivances - the sword for one - which seem a little forced and obvious whilst the Doctor's survival in the vortex pushes the boundaries of his 'getting out of any thingness' to its extreme. It almost feels like cheating.

McGann and Fisher do an excellent job as usual. They make a fine pair & Fisher has impeccable comic timing, which helps a lot in this story. Stephen Perring does a mellifluous job of Grayle, marking his increasing evil with a slight vocal change. However, he isn't one of the Doctor's most memorable villains.

Add a throwaway Dalek and some hints that the future for the Doctor and Charley might not be entirely rosy and you've got an OK little story more memorable for its comedy than anything else, which may be damning the thing with faint praise I'm afraid but compared with 'The Chimes of Midnight' this was a little average.