Audio - Doctor Who: Embrace the Darkness 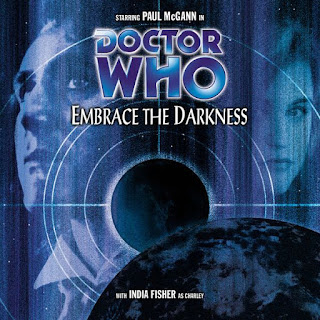 Our Doctor Who audio expert, Tony Cross, delves into the back catalogue available from the Big Finish website. Today is the Eighth Doctor and Charley adventure Embrace the Darkness...


Embrace the Darkness is a base under siege story par excellence, except that the threat may not quite be all it seems to be. In my old age I'm beginning to think that it is the 'base under siege' that is really the signature Doctor Who meme. A group of people - some likeable, some not - find themselves in trapped and in trouble: in the Arctic, in a Moonbase, a Space Station or wherever. There are unpleasant and mysterious things happening. The leader of whatever base we are trapped in will often be a grumpy authority figure. Sometimes they will break under the pressure. Into this situation will stumble the Doctor and his friends. They will be under suspicion, then listened to under duress and finally the Doctor will be allowed to try and save the day. It's a variation on "first they laugh at you...then you win."

Embrace has some of those qualities: a small crew on a spaceship are mysteriously attacked and find themselves stuck in the darkness. It is a painful experience and the crews’ responses: weeping, shock, fear and breakdown are surprisingly realistic for something Doctor Who related. There’re limited amounts of stoicism on show here, which makes a pleasant change.

The three crew members - Ferras (Lee Moone), Haliard (Mark McDonnell) and their leader Orllesna (Nicola Boyce) - are excellently played. There's a realistic amount of banter between them and I particularly like Orllesna's acerbic pessimism when they finally meet the Doctor and Charley, which clashes rather spectacularly with Charley's optimism and faith in the Doctor.

Unusually there are moments in this story when I find Charley a little irritating. I think it might be the moment she is lecturing the Doctor on his behaviour and leaving her behind that feels a little like the Head Girl ticking off some oik. I know there a rule that Doctor Who companions must follow out of necessity but sometimes I wish one of them would actually be grateful to the Doctor for trying not to get them killed whilst he goes off to do something potentially fatal. Whether the Doctor has a death wish - which sometimes seems the only possibly explanation for his behaviour - or not there's no need for every companion to inherit that same desire.

The Doctor makes a terrible mistake in this story based on fear. It is nice to see that the Doctor can be as quick to judge as the average mortal and his attempts to make up for that error feel perfectly right. Charley tells him that he wasn't to know but his response, "What kind of excuse is that?" is very Doctor-ish and Paul McGann does a lovely job again and I'm quite comfortable with the Eighth Doctor. I think it is his combination of boyish enthusiasm and lack of internal monologue.

It is hard to say if there are any real villains in this story. The Cimmerians, the Solarians and ROSM all cause problems for the Doctor and his friends but none of them are villainous. The Cimmerians are afraid, the Solarians confused and ROSM - who is a kind of HAL - is a computer system with problems, mainly about reality. All of them threaten but none of them do so with any real evil intent. It is rather nice in that respect and the Cimmerians are quite an interesting race. I won't dwell too much on this as I don't want to spoil anything for you dear reader.

However I enjoyed this. It's not quite up to the standards of The Chimes of Midnight but it is still rather good.