Audio - Doctor Who: The Time of the Daleks 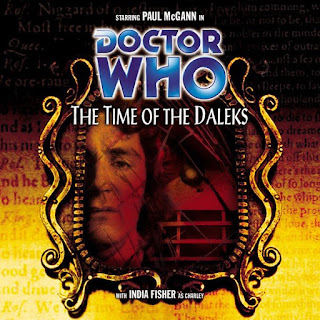 Our Doctor Who audio expert, Tony Cross, delves into the back catalogue available from the Big Finish website. Today is the Eighth Doctor and Charley adventure The Time of the Daleks...

I would probably like this just because you get to hear Daleks quoting Shakespeare. There's something about that, like the "Spitfires in Space" moment in 'Victory of the Daleks', that appeals to my giddy inner child.

Fortunately there is much more to this story than just Daleks doing Hamlet. It all starts when the Doctor realises that Charley doesn't know who William Shakespeare is. A quick scoot around the vortex identifies a rip in time that stretches backwards from a New Britain. Whatever - or whoever - eliminated Shakespeare from time happened then. So off they pop.

It wouldn't be unfair to compare this to that pair of brilliant Troughton Dalek stories: 'Power of the Daleks' & 'Evil of the Daleks'. Indeed, it takes aspects of both those stories & adds its own touch, which is the Shakespeare mystery.

The Doctor & Charley are mistaken for PR consultants, as opposed to Earth Examiners. There is a leader, General Mariah Learman (Dot Smith), who thinks she is using the Daleks for her own ends; there are rebels doomed to be Dalek fodder; there's an almost 'steam punk' time travel a la Evil. Just replace static electricity with mirrors & there you have it.

None of the science probably makes much sense but it sounds fun & the idea of popping in & out of mirrors travelling in time and/or space is an appealing one.

It also takes an element from 'Day of the Daleks'. That it is the actions taken by a rebel to prevent something happening that cause it to happen. So perhaps I am being too nice about this story because of its Shakespeare Daleks. After all, reading back it does sound like a 'Dalek's Greatest Hits'. But sod it. It's done well & is quite fun.

And again it has lots of timey-wimey stuff going on, which makes it feel like quite an up to date take on the Doctor. You could see this as a 'New Who' story.

Charley is back to being finely combative & sarcastic as opposed to hectoring & lecturing, which makes her rather lovely. Her realisation that she might be the cause of all the paradoxes & problems with time that they have recently been caught up in is very well done & her little 'I'm scared' is rather moving in its way.

McGann is up to his usual high standards. And it is nice to hear him go head-to-head with the Daleks, especially Daleks with proper Dalek voices. Each one of these stories that I listen to makes me feel a little sad that McGann's only televised Doctor Who is still the rather disappointing TV Movie. I wish The Moff would use him as the Eighth Doctor during the 50th Anniversary...why not do a 'Doctor Lite' episode, which features McGann in a flashback story & gives Matt Smith a little breather. [This may be why I will never be Doctor Who showrunner.]

As usual there's a fine support cast but special applause here for Nicola Boyce as Viola who gets a lot of stuff to do & does it well. Dot Smith's General Learman is a bit too obviously Thatcher-esque for my liking. It's as if no one can do a strong female leader in British drama without doing a Thatcher. [Although maybe the fault is mine & it is me that can't see beyond Thatch.]

Nicholas Briggs does his usual high standard of work on the Dalek voices & seems to enjoy himself when he must do the Shakespeare stuff & when...I won't spoil that. I know this has been out since 2002 but I feel mildly obligated not to go too crazy with spoilers. If some sneak in, I apologise. I like it when the Daleks are devious & sneaky in addition to their normal murderous shouty stuff.

So, to conclude this is a good one, even if it does riff on elements from other Dalek stories. It also adds an extra layer, which makes it even more fun. I just wish I had an appropriate Shakespeare quote to end on.