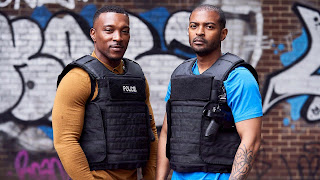 Noel Clarke and Ashley Walters will reprise their roles as Aaron Pike and Ronnie Bishop as Sky announces its commission for a fourth series of Bulletproof before the third one even airs...

After two hugely successful series of the Sky Original, and with the upcoming 3-part special third instalment Bulletproof: South Africa hitting screens on 20th January, 9pm, Sky One, audiences are set again be reunited with their favourite cop duo. Bishop and Pike will to be implicated in a grisly murder, leaving their jobs, lives and families hanging in the balance. The pair must use every ounce of skill and tenacity to bring down the most untouchable villain they’ve ever faced.

Shooting for the fourth series, which will consist of 8 one-hour episodes, is scheduled for later this year in and around London.

Noel Clarke said “We are ecstatic that Bulletproof has been commissioned for yet another season. It is a testament to the hard-working cast, crew, and everyone behind the scenes making it all happen. We work hard to bring you something entertaining and heartfelt and we hope you enjoy it when it returns!”

Ashley Walters added “I am so pleased we can continue the journey of Bishop and Pike. This show has stood the test of time because of the heart we put into it. We really appreciate the support we have had from all that have watched. See you again soon.”
Here's the trailer for series 3, which starts on Wednesday.

Produced by British independent, Vertigo Films, Bulletproof is a hugely successful Sky Original show, becoming one of the highest rating titles on Sky One since launching in 2018.

Allan Niblo, co-founder of Vertigo Films, said “Bulletproof is a show that pushes the boundaries, and this series will be bigger, bolder and more rebellious than ever, giving viewers something they haven’t seen before. Bulletproof has a unique combination of action and humour, and with Noel and Ashley, a partnership like no other. We can’t wait to share their journey with audiences once again.”