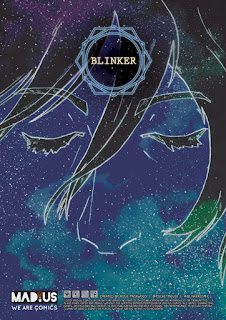 Susan Omand reboots her vocabulary as she read the first issue of a new comic from the Madius stable, Rosie Packwood's Blinker...

I learned new words today. They are blorp, clorp and wlorp. Not to mention KVAROOM! These are, apparently, the noises of hyperspace travel, at least they are according to Blinker, the new comic by Madius Comics alumnus Rosie Packwood.

And Ms Packwood doesn’t mess around in Chapter 1, dropping us straight into the action with a boy, Merrik, running down a corridor on a space station. We don’t know why he’s on the run yet, or who he’s running from, but he’s running. However, he’s not alone. He’s accompanied by an invisible AI pal Vitatrix, beautifully represented on the page by 8-bit code style lettering for her voice, who helps him along the way by turning off cameras, sorting out e-ID’s and generally being encouraging, not least by using colloquial emojis, which she has to read out as separate punctuation marks! I properly laughed out loud at that idea.

And laughter, as well as suspense and adventure, is obvious, although nicely subtle, all through this first issue, which is suitable for all ages, with no really scary stuff, gore or bad language in evidence. Don’t think of this “just” as a kid’s comic though because I get the feeling that this will be a fun read for everyone as the story develops. The two main characters of Merrik and Trixie (Vitatrix wanted a cuter name) are instantly engaging, with a strong bond of friendship and trust formed between themselves, and with the reader, from the start. 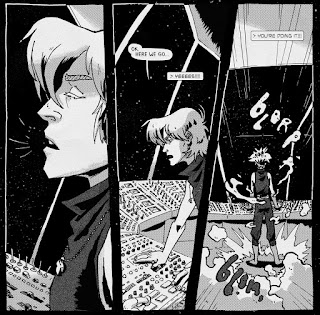 The artwork too is, as you would expect from an illustrator of Rosie’s calibre, fantastic. The lines are clean and concise but the level of detail is immense when the story calls for it; you only have to look at the cockpit of the shuttlecraft and ALL those banks of lights and switches to appreciate how complex that piece of technology is without needing any written explanation, but it never gets messy and confusing. The other thing I really loved about the design of her digital comic is that she has chosen a real newsprint colour/texture for the background of the black and white pages, giving the impression of a proper old-school paper comic and evoking memories of that tactile roughness and the smell of newsprint from reading comics when I was wee. It may seem like a tiny detail to you but it really helped to put me into the right frame of mind for enjoying the story.

Because enjoy it I did, very much. It took me back to Saturday-teatime-TV as a kid, and I’m really looking forward to the next issue because I want to learn more about Merrik, who he is escaping from and where he is heading to. And I think Trixie, with her wit and wisdom, may just have become my new comics hero – so you just know that I’m going to pronounce all my emojis from now on, don’t you? Semi-colon, dash, close bracket.

Blinker chapter one is available as digital download from gumroad for only £1 here: https://gum.co/Blinkerch1.