Book - The Instrument of Death 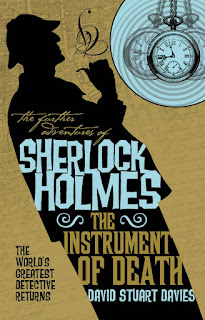 The world’s greatest detective returns in a brand-new mystery, as Titan Books announce the publication next month of The Further Adventures of Sherlock Holmes: The Instrument of Death by David Stuart Davies...

Sherlock Holmes has just uncovered the truth about the theft of a priceless ruby. The wealthy Lady Damury staged the theft and tried to frame her husband – but just as Holmes reveals the truth, Lady Damury is found murdered. Holmes deduces that this is no crime of passion, but the work of a ruthless killer with no connection to the jewel. With reports of a man in a strange, trance-like state, Holmes finds himself entangled in a dangerous game of cat and mouse with the sinister Dr Caligari…

David Stuart Davies is one of Britain's leading Sherlockian writers. He was editor of Sherlock Holmes The Detective Magazine, authored several Holmes novels, the hit play Sherlock Holmes: The Last Act, Titan’s Starring Sherlock Holmes and a biography of Jeremy Brett. He is adviser to the Sherlock Holmes museum and has contributed commentaries to DVDs of the Basil Rathbone Holmes films.

The Further Adventures of Sherlock Holmes: The Instrument of Death is published by Titan Books on 12th February