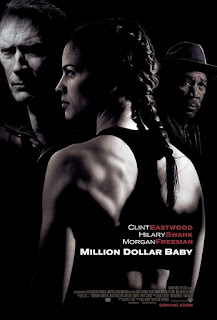 Some actors' work guarantees a box office hit, winning awards and critical acclaim, with films that everyone has seen. Everyone, apart from Susan Omand. So we set her homework to catch up. This month it’s seconds out for Million Dollar Baby and Hilary Swank...

I have a problem. Yes, OK, I probably have more than one problem, you’re right, but I have a specific problem that is relevant to this article.

You see, I watched Million Dollar Baby for the first time last weekend and… I loved it. Well, what’s not to like? I adore watching boxing and boxing-related films. Like most sports films, I know they’re never really about the sport but, for me, there’s a different kind of connection with boxing movies. Because the act of the fight itself is so personal, almost primal, with one individual physically contacting with another, hurting and being hurt, it allows for a much deeper psychological dive into the characters of the people involved at the same time; there’s a rawness, a lack of veneer, a stripping back of barriers to allow access to their true faces and fractured souls. Look at Creed and the earlier Rocky films, Raging Bull, Ali, back further to Kid Galahad and The Harder They Fall. I’ve seen them all. Add into this that Million Dollar Baby has one of the best directors of recent times in Clint Eastwood and, to be honest, I’m quite surprised that I hadn’t taken the time to watch it before.

So what’s the problem? The problem is that I was meant to be watching the film for Hilary Swank’s performance, since that’s whose work I’m being educated on this time. Don’t get me wrong, I think she did fine but I was never really convinced by her or connected with her character. To me, she came across as being about 10 years younger than 31, her character’s stated age in the film and, surprisingly, also around her own real age at the time the film came out, and the “oh golly gee” accent and enthusiasm started to grate on my nerves after a while, although I can appreciate the physical work she put in to look the part because she didn’t seem out of place either in the gym or in the ring. But that wasn’t really the problem.

Maybe my issues stemmed from the way her part was written, in that the character’s age shouldn’t have really mattered to the story, but explicitly stating her age and making it an issue in the plot, immediately made it an issue for me, leading me to expect a more mature character than the one she portrayed. Also Maggie’s upbringing should have given her a much harder, more cynical edge in her approach to the world and what should have been her need for focus, her determination to “be good at something,” came across more as a naïve eagerness to please rather than a single-minded, self-centred passion and tenacity towards her own end goal. But that really wasn’t the problem either.

No, the problem was putting her up against the Hollywood heavyweights of Clint Eastwood and Morgan Freeman on screen, both of whom absolutely knocked it out of the park with their own performances. Eastwood, especially, pretty much gave the performance of a lifetime as the world-weary ex-boxer turned manager, and he should have got the acting Oscar he was nominated for as well as the directing one he did get because he just drew my attention in every scene. For an actor who usually takes on a more emotionally detached role in his films, the mixture of reined-in feelings, anger, frustration, guilt and love, he could convey in just a glance, a simple gesture or the way he phrased a sentence as Frank, was truly stunning. It was an acting masterclass and, although Swank probably did well to not get completely obliterated every time they shared the screen, it certainly did her no favours and, for me, she could have been anyone up there.

So I think I maybe need to watch her in something else before I can fully appreciate her work because, although I can now say that I’ve seen a film that she’s been in, she’s not yet proven to be the “oh wow” stand-out actress that all the cinema buffs I know say she is, so I must have missed something. I remain, sadly, uneducated this time.