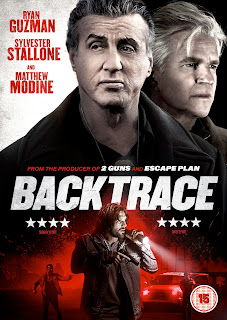 
After suffering a brain injury from a bank heist gone wrong, MacDonald (Matthew Modine) develops amnesia and is put into a prison psychiatric ward. Following his seventh year in evaluation, he is coerced by an inmate and a ward doctor (Ryan Guzman and Meadow Williams) to break out of prison and injected with a serum that forces him to relive the life he’s forgotten. MacDonald must now elude a local detective (Sylvester Stallone), a toughened FBI agent (Christopher McDonald) and the drug’s dangerous side effects in order to recover the stolen money all while confronting his past.

It should have been a good thriller, or at least a fun couple of hours of mindless violence and car chases. The idea of rediscovering a forgotten past is always a promising plot device and the cast is impressive with big names and other known faces; the thought of Stallone vs Modine in a film was what caught my attention initially plus I spotted other actors that I knew from TV shows throughout the film and most of them did OK with what they had. However, for me, that was where the good stuff about it ended.

I’m not going to lie, the first time I watched the film I fell asleep for 20 minutes near the start of it and woke up not knowing who was who or what the heck was going on. So, thinking it to be unfair to judge the film on what could be my own failings to stay awake, I stopped and went back to the beginning to rewatch from the start again. It turns out I hadn’t missed much the first time. Honestly, there’s more information about the characters and the story in the written synopsis above than ever you’d find out about them in the film. It’s never explained in the film who Guzman and Williams’ characters, along with an (I assume) fake, rather than corrupt, prison warden, played by Tyler John Olsen, are, how they know each other and knew of MacDonald and the money or how/why the plan was put together to get Guzman’s character committed for psych eval (he wasn’t a long term inmate) so that he can mastermind the abduction of MacDonald, so I found it difficult to buy into any of their stories. The plot, such as it is, would have made a good 20-30 minute short or TV episode plot but it’s dragged out over the 90-minute runtime by using repetition rather than adding depth with useful backstory, explanation or character building. The duplication was obvious too; there were a few too many stops in what was basically a point to point treasure hunt as the “bad guys” try to get McDonald to remember where he hid the money by jogging his memory with known locations.

I really wish that I could offset this lack of story with a “style over substance” claim but I really can’t because the film also felt badly put together and it was obvious that the budget all went on getting the “names” rather than anything else. For example, a supposedly suspenseful drive to the scene by the detective was spoiled by a) being far too long, cutting between the drive and a gunfight too many times and b) going on the same piece of road several times over in the same scene – I started to recognise the corner. Also the simplified shaky-cam effect and nauseating noises for McDonald’s memories returning was used so often it became annoying rather than disorientating. Add into this plot-twists that you could see a mile off, which I couldn’t even enjoy the build-up for because of the boring repetition, and an incredibly weak ending and it’s two hours of my life I’m never going to get back.

I did, however, enjoy my nap, so that’s something I guess.