Film - The Devil All The Time 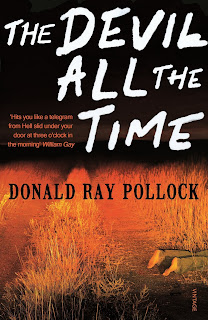 Filming begins next month on the film adaptation of Donald Ray Pollock’s 2011 novel The Devil All The Time...

In a place called Knockemstiff, Ohio, a forgotten backwoods of this country - a storm of faith, violence and redemption brews. Out of desperation to save his dying wife, Willard Russell turns to prayer which succumbs to sacrifice. This sets our protagonist Arvin, Willard’s son, on his path from bullied kid to a man who knows when to take action. The Devil All the Time is a finely woven “mid-western” gothic tale involving a nefarious cast of characters: a serial killer couple, a faith-testing preacher, and a corrupt local sheriff in a story that is told across two decades.

With Ninestories’ Jake Gyllenhaal (yes, really) and Riva Marker on board as producers, alongside Randall Poster and Max Born, the film is due to hit our screens in 2020.