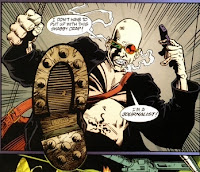 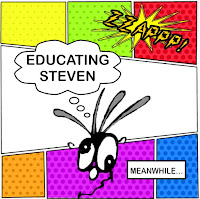 In an effort to further his graphic novel and comic education, Steve Taylor-Bryant has been set "homework" of reading comics released throughout the years that he has missed out on. This week, he hits the streets with Transmetropolitan...

So here I am with a huge list of material to work through courtesy of the boys at Madius Comics, I have the money to buy them courtesy of the invention of the credit card, and I am keen to get going. Problem though, where the heck do you start? Wanting to learn who the greatest creators were and study their work was, and still is, a great idea and my thirst for knowledge is still strong but which one first? None of them excite me for the reason that I don’t know any of them. None of them stand out to me from the titles for the reason that, yep, I don’t know any of them. I’ve been allowed to do them in any order, so I guess for this first lesson I’ll start at the top with Transmetropolitan since I have vaguely heard of that one through some friends who, for years, have exclaimed that I am a moron for not having read it all already.

After years of self-imposed exile from a civilization rife with degradation and indecency, cynical journalist Spider Jerusalem is forced to return to a job that he hates and a city that he loathes. Working as an investigative reporter for the newspaper The Word, Spider attacks the injustices of his surreal 23rd Century surroundings. Combining black humour, life-threatening situations, and moral ambiguity, this book is the first look into the mind of an outlaw journalist and the world he seeks to destroy.

My friends, the Madius boys, the general public were all right. I am indeed a moron for not having read Transmetropolitan before. What Warren Ellis has written and Darick Robertson have illustrated may be, on the surface, a comic book but it’s mainly a Hunter S. Thompson look at politics and the changing world of technology and it is amazing, especially when you consider this was written about eight years before Twitter started and six years before Facebook. Ellis has grasped the power of the internet before the internet was even a big thing. The book is full of examples of the way the population get their news and opinions that are supposed to be futuristic and yet here we are, twenty years after the book was written, and our clickbait bubbles are right there on the page. Ellis knew what was coming and he warned us, and like the sheeple in The City we fell into the corporate traps. Whilst the sex and debauchery and overcrowding of The City may be slightly exaggerated for comic storytelling purposes Transmetropolitan reads like a non-fiction book. The politics that flow throughout the book, the political choice between the President, The Beast (Trump twenty years before anyone thought that was possible), and Callahan, The Smiler, plays out like I was reading Fear and Loathing on the Campaign Trail ’72 which just adds to the Hunter S. Thompson influences.

The thing I took most from Transmetropolitan though was how Ellis and Robertson predicted the chaotic lives we would all be living. They may very well have set their story in two hundred years time, but they nailed our very near future. The lack of care people now have for other people, the media abuses of the truth, the open and wanton corruption that we just put up with, the whole attitude of selfishness we see that wasn’t as prevalent in the ‘90s, when Transmetropolitan was written, Ellis and Robertson predicted and then brought to life. Ellis saw the power of the internet and technology and how it could be abused to sway public opinion and warned us right there in the pages of his book, he fucking warned us! We were too stupid to listen, too encapsulated by the bright and shiny to be wary of what was going to happen to us. Transmetropolitan is more than a comic book, it’s a red flag we all missed and should have been taught in school instead of sold in comic book shops. You never know, from the ugly chaos on the page, we may have bettered ourselves.

Transmetropolitan is incredibly well written, Ellis doesn’t miss a beat, and Robertson’s art brings alive the dirt and corruption and gives us a vivid anti-hero to root for. Am I educated? Hell yes! Am I excited for the next book on my Madius list? Not really. How the heck are they going to top that?!