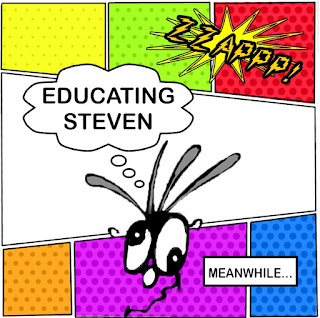 In an effort to further his graphic novel and comic education, Steve Taylor-Bryant has been set "homework" of reading comics released throughout the years that he has missed out on. Here’s the reasons why and the list of stories for Educating Steven: The Comics Edition...

Okay not Gotham City, but still a cave of sorts, well it's dark and damp. I read comics religiously as a young child, mainly due to a pal of mine. We would share issues that we had discovered in various shops and spend our break times at school devouring the tales contained within. It grew an unbreakable bond between us. Unbreakable that was until my friend was 12 years old and took his own life due to the racist bullying, he was receiving that, to my shame, I never noticed. I gave up comics then, 13 years old and just not interested because I didn’t have my friend to share that love with and, apart from some Green Arrow and Tank Girl titles through the years, it has been decades since I was ‘into’ comics.

I love the independent stuff I’ve been immersed in recently, I hold Monty Nero in the highest regard, and my pals Rob and Mike at Madius are just wonderful guys as well as the most creative people I think I have ever met, but I lack that background knowledge that all fans, and especially comics journalists have. I don’t know who many of the iconic writers are and, if I’ve heard their name, it doesn’t necessarily mean I know their work. I can’t review a comic and compare it to anything else because my base knowledge isn’t there, I can’t take a book written by somebody and compare it to their other titles because… yep, I don’t have the base knowledge.

Then I started reading books like Moving Target: The History and Evolution of Green Arrow, a present from my six-year-old, and started to watch documentaries on creators like Grant Morrison. I’m now fascinated and starting to live the youth that I maybe should have had but I need help. Last year on our sister site AlbieMedia, Rob and Mike kindly beat Susan with a stick and mocked her because her music knowledge consisted of Mozart and The Bay City Rollers, but they devised a scheme whereby she was given a list of albums in the hope that they would spark some education in her. In my hour of need I also turn to these unlikely superheroes and ask for a crash course in comics. Who are the iconic writers and artists? What titles should I have read long before I turned 43? Well, our lycra wearing duo didn’t disappoint and now I have homework. To read & review (in no particular order) and hopefully gain some education from the following list…