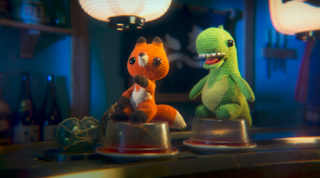 Susan Omand gets the stuffing knocked out of her by an animated short film, Lost & Found directed by Andrew Goldsmith and Bradley Slabe...

Don’t watch this film if you’re having any kind of day that requires you to be emotionally “pulled together.” It’s so beautifully tragic a tale that, if you are happy to start with, it will make you immensely sad and, if you are sad anyway, well, then it will completely break your heart.

I’m amazed that a 7-minute stop motion animation about crocheted toys, a fox and a dinosaur, could have such a profound effect on me; I was in tears by the end of it. The set-up of the story is brilliant, showing that Fox and Dinosaur are friends, having fun together in a series of photos in a slideshow on the mobile phone that makes up the window on one wall of their "house" of boxes, built on a table in the playroom of a real house, as Dinosaur wakes up to find Fox isn’t there. A quick look around finds Fox out in the garden watching the Japanese water feature, one of these ones where a stream of water fills up a bamboo jug til it tips the water into a pool or, in this case, a barrel before righting itself to fill up again. Fox turns to see Dinosaur through the door and they blow kisses to each other but, as they do, the bamboo jug tips and the water catches Fox’s tail sending him splashing into the barrel. Try as he might, he doesn’t have the energy to get out, falling back to the bottom under every new cascade of water. Dinosaur starts to run to help his friend out of the barrel but, as he does, a strand of wool from his foot catches on a nail on the table, pulling the stitching loose and he realises that every step he takes towards his friend will make him unravel a little bit more.

The animation is superb, with everything perfectly to scale that these characters can only be toys, rather than fantasy creatures, and the textures, from the wool to the water, are perfect. There is such attention to detail, like the way the nail in the table catches some fluff from the dinosaur as if it’s happened before, it just adds to the richness of the story telling. But there is no real “telling” of the story as such, as there is no narration or intelligible dialogue, just little squeaks and grunts from the two characters along with superb soundscaping and atmospheric music. However they, their relationship and both their predicaments are so well defined by visuals alone that I found myself so completely buying into them and their story that no words were needed.

I’d like to say that, after the wringer of emotions we get put through as the story unfolds, there’s a spark of hope in the way the film finishes, that the tenacity of love wins out in the end. Maybe it does if you choose to see it like that, or maybe it really is just the bleak and futile act of the despairing, trying to hold on to something that has gone. Either way, prepare to have your heart unravelled.

You can find the full film here (if you're ok with being a blubbering mess at the end of it) and you can watch the trailer below.