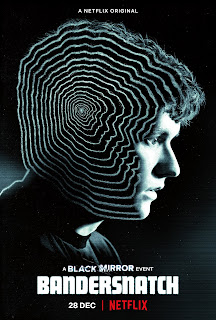 With a unique, complex style, this segment of the “Black Mirror” series certainly caught my attention, leaving me scratching my head, but watching more, in search of answers. The episode follows a guy named “Stefan”, who’s struggling with a decision he made, that led to the death of his mother, when he was just 5 years old. Interestingly, this ties into the modern day that his story is set in because he’s started reading into books that allow you to dictate how the story goes, making his mind start to believe that someone/something is dictating his own decisions (which would be the player, as this is an interactive episode). Stefan is not only dealing with this “revelation” of sorts, but is working on a game of his own, in which the player must make decisions, for his job. And there are a number of endings that will show you scenarios where his game is either successful or not, often with different twists or turns added to it.

The episode is titled “Bandersnatch”, because that is the title of the game that Stefan is designing and coding. And, ironically, the player who is controlling Stefan must also make the right decisions to try and get this game finished and given a good review. The game involves watching a number of scenes, as if the episode was like any other of the show, there’s no fancy animation or motion capture used (like in many multiple choice games) which is what makes this somewhat stand out in its own way to your typical, “choose your own path” game. As the game begins, it almost seems like the Dad is testing your ability to make decisions as both the player and Stefan, meaning that he potentially knows about Stefan’s issues early on, the issues that he may, at some point, believe he’s being controlled by someone or something else (that being the player). So the first choice is fairly simple, but I sort of got a strange vibe from his Dad when he asked his son to make a decision as if he were a lab rat of sorts, and of course, this would be so the player could get the hang of making choices earlier on, though I think there may be double meaning behind it.

I personally started by playing this story as if I were the main character, he did seem relatable to me, because he struggles to make his own decisions, which I’ve been known to do in stressful situations, and also be a bit awkward when it comes to knowing how or if to respond to someone at times, much like Stefan does.

As the story progressed, there were moments when Stefan had to choose between two seemingly obscure choices, such as choosing between seeing a psychiatrist, or following someone he recognised, which I chose to do, since this seemed like the kind of thing I would’ve done (as I tend to be easily distracted). This led me to an odd moment where the person he recognised, Colin, Stefan’s work colleague, attempts to explain how life doesn’t really matter in this world, because it’s like a game, and how you will just respawn in another world if you die, leading the player to choose between jumping off a balcony or his colleague doing it.

Strangely enough, I thought he was right, because I was actually playing a game, and I thought this point in the story was meant to involve the characters realising this, and finding some way to fight it, so I chose to jump off and thought Stefan would just reappear somewhere else. I think it was moments like that in the show that can make the player realise how easy it is to talk someone into doing something, and how the game can make you think the story is gonna go one way, but there ends up being a plot twist or a moment that makes you think otherwise, like in any normal TV show. 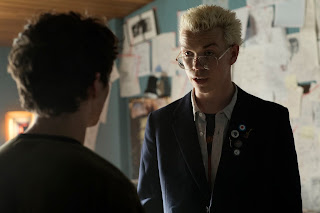 I say this, about how a character can influence the player’s decision, because Colin managed to convince me, with all his strange logic, that nothing we do matters because we are all just living in a game (the fact that Stefan is in a game definitely helped me believe him), as Stefan’s colleague strongly states. This led to the, actually fairly obvious, ending where my own character died because, well, because he jumped off a balcony, and the game fortunately let me go back and choose a different path.

As the story progressed, I started making some ridiculous choices, as the main character started to realise that his choices weren’t his own, and when I was offered the chance to kill Stefan’s dad, purely because Stefan was losing his mind over not having control of himself, part of me just wanted to see how doing it would play out, I also thought it might be funny to watch (you can call me a psychopath). So, from here things just got even more weird, with Stefan relying on my choice as to how to dispose of the body and leading me to first have the body discovered in the garden, because a local dog from the neighbourhood manages to dig it up and leading to the game not being finished at all.

Weirdly, again, it gave me the option to go back, and rectify this mistake, by “chopping up Stefan’s dad”. This led to an ending where the game was finished, and was definitely successful, but eventually the game was discontinued when they discovered that Stefan had killed his dad, and eventually, someone many years later, decided to recreate this game’s style through the Netflix TV show that is Black Mirrors: Bandersnatch (which I thought was a very clever tie in), so it ended up almost going full circle.

After playing it this time around, I began to come up with a theory about this game, that is Bandersnatch can only really have one proper ending, because the game is designed to make it look like you have a choice. It was mentioned by Stefan, when he’s talking about the Bandersnatch game. In all the moments when you are given an ending, that I experience in this interactive series, I was given the option to end the game there or go back and change by decision from the last point when I could make a decision. However, in many of the books where you can “choose your own path” that I can remember doing, I was told to go back to the start of the book if I got my character killed, to give a sense of choice/consequence for my actions. But that doesn’t happen with this episode, and I think that was intentional.

I also found it clever how the game/episode manages to force you to make a decision near the start, where you have to choose to decline the idea of working in an office environment, because of the fear of being controlled or having an idea, in any way, dictated by others, which is actually spoken about by the main character. I think this would explain why he would end up having a mental condition where he believes himself to be being controlled by people from the future (which technically, he is), because of that fear of being controlled, it somehow led his mind to create a circumstance where he is.

There is also a brief mention involving parallel universes in the episode which really interested me because during the moment when Colin, Stefan’s work colleague ends up jumping off of his balcony to prove a point about parallel universes, he ends up not showing up for work. But in a circumstance that forces you to retry events before this happens, he ends up showing up again, which ironically, almost ends up being a parallel universe of the event where he killed himself, so in a way, there was more logic behind his actions than I realised.

The game can even attempt to break the fourth wall, in a bigger sense of the word, when Stefan has a conversation with the player, through Stefan’s computer, and, if you make certain choices that lead to it, you can end up telling Stefan that he is in a game/TV show, that is on Netflix. This can lead to a path where the player ends up being shown on screen by a woman who’s recreating the whole “Bandersnatch” game, in the modern day, and showing herself developing the game we were playing mere moments earlier.

This episode is definitely mind-boggling, and if you want the kind of connection/interaction with a show that will keep you thinking and talking with someone about it for hours, I would absolutely recommend “Bandersnatch”. Because it almost seems too complex to analyse from just one perspective and being able to share your own with others after interacting with it, is what makes this show, and this episode so clever. I personally found this episode both clever and compelling and I believe that shows like this are a hint at good things to come for interactive television in the future.