Watching the Detectives – A Touch of Frost 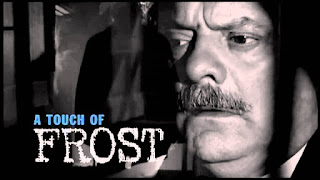 In a series of articles, Susan Omand and Steve Taylor-Bryant are going to remember the policemen, spies and criminal specialists that entertained them over the years. Today, Steve goes in search of A Touch of Frost...

I’m not sure if other countries have television national treasures or not and, let’s face it, research is not really for me, but in the United Kingdom we do. We hold some our performers up on pedestals and expect them to be the characters they are most famous for performing for their entire lives. One such star is David Jason. Open All Hours and Only Fools and Horses made Jason a world-famous comedic performer, an icon in situation comedy, and one of the most beloved personalities ever produced on these shores. So, when a beloved comedian, an actor whose catchphrases and one-liners can reduce someone to a laughing tearful mess on the floor, tells you he is going to attempt work of a serious nature you don’t really believe him. David Jason wanted to throw off the shackles of comedy and test himself with some more dramatic material and, I’ll be honest, I thought that was brave. When A Touch of Frost first aired in the UK it could have been the end of David Jason, it could have tarnished his legend, but instead it showed an actor that could break free of his legacy and impress doing just about anything.

A Touch of Frost, a police procedural, or so I thought from the press before it aired, was dark in tone, darker I think than anything we had witnessed in our television crime dramas at the time. It started with William ‘Jack’ Frost (David Jason), an ageing detective within the major crime’s unit of Denton Police, struggling to care for his ailing wife as she edges closer to death. Frost felt trapped as he wasn’t in love with his wife and felt trapped by her illness and yet stayed through duty whilst still investigating crime in the Denton area under the supervision of Superintendent Mullett (Bruce Alexander). Each episode lasted approximately an hour and half and were either a self-contained story or a three-hour movie broken into two parts, and throughout 15 seasons the crimes seemed to get more heinous as Jack seemed to get older and more unconventional in his efforts to bring his brand of moral justice to the events. Throughout the years he had a Detective Sergeant to rely upon, Toolan (John Lyons), but each chapter of A Touch of Frost saw Jack partnered with various partners. Many were new to the game, or not wanted by other forces, or broken in some way, and it was these relationships that were the crux of why A Touch of Frost worked. You can have clever writing and enthralling crimes but if you don’t enjoy the performances of the actors tracking down the villains it’s very hard to buy into the adventure. Each story, because of the complexities of the different officer Frost was teamed with, saw David Jason have to react to the actors in different ways, bring a different chemistry to screen all whilst having to stay in character and if anyone is left in the world that doesn’t believe sitcom actors can do drama, just watch Jason in this show as he is stunning in every episode.

Over fifteen odd years I grew up with Frost, felt for him when he couldn’t find happiness, laughed with him when he got one over on Mullett, cried with him when he lost a colleague. Forty some stories, all incredible in their structure, with a who’s who of British television popping up as either a copper of a villain, all held together by one man, our national treasure. I doubt very much with the changing landscape of television nowadays that we will ever have another show like A Touch of Frost and that saddens me, but we do have boxsets, so we can relive the events of A Touch of Frost whenever we like.