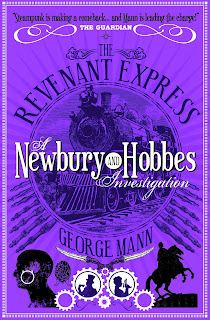 It's publication day for George Mann's latest Newbury and Hobbes novel, The Revenant Express. Courtesy of Titan Books, as part of the blog tour, we are honoured today to be allowed to share with you an extract from the new book itself. So grab a cuppa and enjoy...

Some days, she liked the rain.


As a child she had often sought its purifying qualities, enjoyed the play of it upon her upturned face. Out in the garden of her parents’ home, heady with the scent of damp, fresh earth, she had allowed it to wash away all concerns; for her desperately unwell sister, her bickering parents, her ailing grandmother. She had not forgotten the comfort of those days, and even now, she still enjoyed the thrill of being caught in a sudden English downpour.

Today, however, was not one of those days. Today she would have rather been at home, curled up by the fire, or else in her barely used office beneath the British Museum, shuffling papers; anywhere but in Stoke Newington in a torrential downpour, standing amidst a gaggle of police constables and overeager civilians who had yet to be persuaded to clear the area.

Veronica angled her umbrella in order to look for Sir Charles Bainbridge, sending a cascade of pooled water over the brim, spattering her shoes. She sighed.

Bainbridge was standing a few feet away, muttering in low, fractious tones to another man she didn’t recognise. When he saw her looking, he gave a weak smile and raised a hand in brief salute. He looked hassled, which, Veronica allowed, was quite understandable, given the circumstances. All of the furore, all of the noise and bluster and milling crowds, centred around the thing on the pavement, the object that she had so far studiously managed to avoid. The people around her had already dubbed it—in hushed, scandalised tones—“the monster.” She could ignore it no longer. Bracing herself, she turned her head to regard it.

She stifled a gasp. It was even worse than she’d imagined. The creature was, without doubt, one of the most ghastly things she had ever seen.

It had once been a human being—although she couldn’t easily ascertain whether a male or female—but now its body was so bloated and malformed as to be almost beyond recognition. The victim appeared to be on its back, its belly distended to at least three or four times its natural capacity. The flesh had burst, and from deep within the intestines strange plant-like growths had erupted, pushing out through the ruins of the person’s clothes.

Tendrils, resembling masses of thick, ropey vines, were splayed across the pavement, spilling out from the corpse as if feeling their way towards the gutter. Pink tumours, resembling bulbous, fungal growths, nestled amongst the vines like sickly blooms, ready to burst open at any moment and dissipate their spores.

The flesh of the face was terribly misshapen, as if the same gnarly growths had formed beneath the skin, bulging out, warping the features into something less than human. The result was that the victim looked as if it had suffered from a severe case of elephantiasis, or that the corpse had been preserved mid-metamorphosis, frozen in a state of change. Perhaps most bizarrely, fresh green shoots had emerged from the fingertips of the right hand, which rested on the paving slabs nearest to Veronica, as if the dead person were reaching out to her in silent desperation.

She swallowed, feeling bile rise in her gullet.

Two constables were holding umbrellas above the remains, attempting to protect it from the storm, but despite their best efforts, raindrops were still bursting upon the creature’s hide, trickling over the exposed flesh and giving it a glistening, glossy appearance. While she watched, a man in a white smock nudged one of the constables out of the way and began poking around in the corpse’s mouth with his index finger.

“Horrible, isn’t it?” muttered someone nearby. The voice was familiar. She adjusted her umbrella and turned to see Inspector Foulkes standing just a few feet away, regarding the corpse with a thoroughly disgusted look on his face. He turned his head, his expression brightening slightly when he saw she was looking. He was a tall, bearded man in his late thirties, a good policeman who, in recent months, had begun to appear rather downtrodden by the interminable horror of his profession.

“It is, rather,” she confirmed.

They were silent for a moment.

“How are you, Inspector? Is your family well?” she asked, in an effort to dispel the pall of gloom that had seemingly settled over them. Neither of them, however, could tear their eyes from the sight of the unusual corpse.

“Oh, very well indeed, Miss Hobbes. And your sis—” He caught himself mechanically reflecting her question. “That is, I mean to say . . .” He looked pained. “Oh, I’m sorry, Miss Hobbes. Things must have been very difficult for you, since your sister passed, and I . . . I . . .” He trailed off, unable to find the right words.

Veronica smiled. “Why don’t you step out of the rain for a moment, Inspector? This umbrella’s big enough for two.”

Foulkes sighed with barely concealed relief. “Thank you, Miss Hobbes,” he said, with feeling. He edged closer and she held the umbrella aloft to accommodate him. As a result, she felt the patter of raindrops against the back of her plush red evening cloak. The garment, she knew, would never be the same again.


We would like to say thank you again to George Mann and Titan Books for allowing us to publish this extract of The Revenant Express. The book is available to buy now.