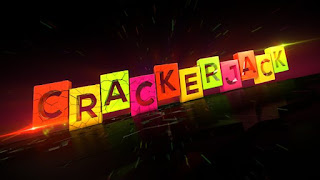 It's Friday, it's five to five and it's.... no wait it's Tuesday at whatever time you happen to read this, but anyway. The BBC are bringing back a cult 80s kids TV show...

Yes, it's Crackerjack! (*waits for all of you who remember the original to shout Crackerjack! at your phones.*) The show, a staple of British children’s television from 1955-1984, marked the start of the weekend with its mix of sketches, pop performances and games.

Now, 35 years after its last outing, it is making a comeback. It will be made at MediaCityUK in Salford by BBC Children’s In-House Productions and will be on CBBC and BBC iPlayer.

"The retro classic will be revitalised for today’s connected generation giving them an all-round, interactive experience while retaining the beating heart of what etched Crackerjack (Crackerjack!) into the affections of British children for three decades. There will be a heady mix of jaw dropping magic, laugh out loud comedy and silly studio sitcom - and of course it will still air on Fridays with hundreds of kids in the studio taking part in all the fun."

However a classic part of the show will also make a comeback as Double or Drop returns, in which kids get plucked from the audience to answer questions and go head to head to win prizes - or cabbages if they get it wrong - and the much-coveted Crackerjack (Crackerjack!) pencil.

The show was originally presented by This Is Your Life’s Eamonn Andrews. He was followed by Leslie Crowther, Michael Aspel, Ed Stewart and Stu Francis.

This new series of 10 45-minute episodes will be presented by children’s TV favourites, Sam and Mark, and will air next year. Whether they change the Chas n Dave Opening theme tune is probably also up for debate.