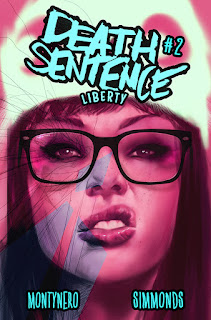 With Monty Nero's latest crowdfunder for issue #3 kicking off at 10am this morning, Steve Taylor-Bryant gets caught up by reading the second issue of Death Sentence: Liberty...

Picking up in the Brixton Freezone after the fight in the last issue Verity and Roots finally get to meet properly whilst over in City Hall the Boris Johnson clone, Tony, is distraught as what just happened will probably end his chances of becoming party leader and gaining all that power. Verity is mad at the masked friend of Roots thinking he is responsible for Fincham’s death, but he isn’t, and over on The Island Jeb is still sneaking about trying to get at the secrets, unsuccessfully thus far and nearly getting caught in the process. We find out that Roots doesn’t know anything about G+ and Verity starts to talk to her about the troubles whilst they are spied on. Jeb is now in disguise and accidentally stops one of the test subjects from escaping. Verity goes back to Roots place and smokes some of her dope before they start to plan their next move and go through Fincham’s files together. Jeb witnesses Cosmo looking into the minds of others which is where I am now going to leave you as to go on would add spoilers.

Still no Weasel, Monty Nero seems to be holding back and I can only hope its for great big reasons, but the story has moved on both in Brixton and on The Island and there appears to be no drop off in either tension or consistency as we approach the middle of the run which is great news and there is so much to appreciate from Martin Simmonds' art this time around, the ‘gravity defying, mind altering’ panel and the following page with the use of orange and blue during Cosmos vision in particular which are just stunning and with every issue Simmonds just ups the ante with his beautiful use of colour to tell the story alongside the dialogue. 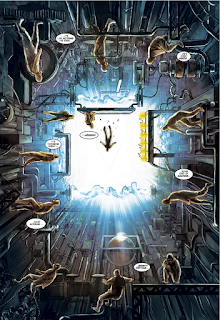 Death Sentence: Liberty is turning into a run just as good as its predecessors and the timeline that started all those years ago in the first issue of Death Sentence, which has built slowly throughout each series, still fascinates as much as the action you get from each issue. Monty Nero is really turning into a masterful storyteller and I cannot wait for Liberty to continue. Get on the Kickstarter and catch up!