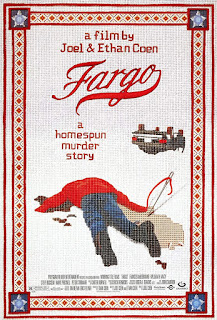 Some actors' work guarantees a box office hit, winning awards and critical acclaim, with films that everyone has seen. Everyone, apart from Susan Omand. So we set her homework to catch up. This month, ya, it's Fargo and Frances McDormand...

I guess I’m a bit late to the party with this one, as only just last weekend I got round to watching the Coen Brothers’ film Fargo, 23 years after it got released. But that’s the great thing about the Educating Omand lists – I have to try things that passed me by back in the day, to see what it is I missed.

I was going to start off this review by saying that I have a love/hate relationship with Coen Bros films but that’s not strictly true – my feelings for their work don’t run that strong, it’s more a WTF/Why relationship. I just don’t seem to get what the hype is about and this film is a great example of that.

If you, like me, haven’t seen the film before, here’s the official MGM synopsis:

“A patrolman and two innocent bystanders are discovered murdered in cold blood on a snowy highway in North Dakota, leading a very pregnant policewoman, Marge Gunderson (Frances McDormand) on an investigation that uncovers a conspiracy of greed and ineptitude.

Minneapolis husband, father and car salesman, Jerry Lundegaard (William H Macy), who has long chafed under the thumb of his wealthy boss and father-in-law, concocts an elaborate scheme involving the kidnapping of his wife and a million-dollar ransom to pay off his extensive gambling debts. However, everything that could possibly go wrong does indeed go wrong.

Officer Gunderson's outwardly homespun and folksy persona conceals a penetrating mind and a fierce moral compass, and she easily sees through the poorly executed and badly hidden events perpetrated by the bumbling, yet highly dangerous kidnappers (Steve Buscemi and Peter Stormare).”

Sounds pretty good and should deliver a fun and funny 90s action thriller right? Wrong. To say it was a slow burn is being kind – it bimbled along, half asleep and minding its own business, without even trying to build character empathy or plot suspense and the 98 minute runtime easily felt like twice that. I will agree it was indeed highly violent, usually a plus point for the films that I watch, but I found that I didn’t care enough about any of the characters to root for either the protagonists or the victims, so the impact of that was lost on me and became just a lot of red splatter that wasn’t even funny. No, not even the much-acclaimed wood-chipper scene. Instead of empathy there was apathy, the story was frustrating, the accents frankly f’ing annoying (ya?) and the characters ultimately pointless, even utterly irrelevant in some cases. I mean, what was with that weird scene where she meets an old school friend in a restaurant? What has that got to do with anything at all? Anyhow, I digress. The cinematography was beautiful though, an overhead camera shot of Macy walking through an empty snowy parking lot dotted with trees in boxes was pure art, but one five second pan doesn’t really hold a film together does it? It certainly wasn’t the film that I had wanted it to be and it was difficult for me to see where all the award nominations were justified.

But then I started thinking about it. Maybe it’s because I AM ACTUALLY late to the party. I’ll try to explain what I mean. Take a look at some of the other films that were in cinemas in 1996. You have some amazing action films (Independence Day, Mission Impossible, From Dusk Til Dawn, Twister etc) and you have some superb comedies (Jerry Maguire, Space Jam, The Cable Guy, The Birdcage). There were beautiful looking films (Romeo + Juliet, The English Patient) and stunning character pieces (Trainspotting, The People vs Larry Flynt, The Crucible). All glossy Hollywoodesque blockbusters, even if they don’t like to admit it. But there was nothing else like Fargo. Not back then. In the years between then and now, so called “cosy crime” has had a huge resurgence in popularity. There are books and films aplenty that let us see the mundane home-life of both sides of the legal fence. Even on TV we get things like the sublime Lilyhammer, Bosch, The Patriot and Sneaky Pete, even The Sopranos, all of which did something similar to Fargo in opening the lid to the reality of what movies have as all-action, all-glamour jobs, but they did it far better in my view. However, back in 1996, Fargo was unique, a one-off. It was different, so it stood out. And, in the era of a glut of action films and cinema filling blockbusters, that seems to have been enough to garner the awards.

It also strikes me, though, that I maybe should watch something else that Frances McDormand was in to give a fair assessment of what she can accomplish on screen since, after all, her work is the reason that I watched Fargo in the first place. For now though, all I can assume is that that level of “meh” takes a great deal of skill to portray but, right now, I can’t really be bothered finding out.