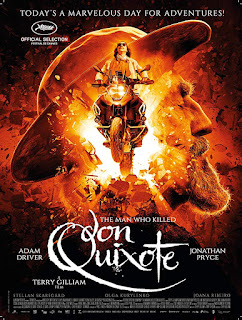 Today is a marvellous day for adventures indeed, as Steve Taylor-Bryant learns enough Spanish to watch The Man Who Killed Don Quixote on Blu-ray...

After nearly thirty years Terry Gilliam finally got to make his passion project, The Man Who Killed Don Quixote, and I… well, I had to wait another year because in typical Gilliam style nothing is easy and a court case over production rights meant that only certain parts of the world got to view Gilliam’s latest. I would still be waiting if it wasn’t for stumbling across a Spanish Blu-Ray release and so, like Gilliam takes risk, I too took one and just hoped that the Spanish disc would be okay, and that I wouldn’t have to learn another language to finally be able to say I had seen The Man Who Killed Don Quixote. I put the disc in and with Google translate I managed to navigate the menu enough to make the film play in English without subtitles that aren’t part of the film and now I just had to overcome my nerves enough to press play. Yes, I was nervous. Terry Gilliam is my all-time favourite filmmaker, he tells stories that just resonate with me in some way, mainly they allow me to be an adult whilst living out a child’s fantasy life for a few hours, but after nearly three decades, multiple casting issues, sadly first choice for Quixote Jean Rochefort and modern day choice of John Hurt both passed away, would this film just be Gilliam throwing everything at getting it made just so he could say he had done it? Or would it actually be watchable? I really shouldn’t have worried and my nerves quickly dissipated.

For those of you that have somehow managed to get through life with no idea about Gilliam’s struggles to get this movie made, the film is quite mad but basic in its initial plot. Toby, here played by Adam Driver, is the egotistical and cynical star director of the marketing and advertising world planted in Spain to use the idea of Don Quixote to sell insurance or some other nonsense. Surrounded by pandering assistants and worn out and stressed producers and under the watchful eye of the aggressive Boss (Stellen Skarsgard) and his model wife Jacqui (Olga Kurylenko) whose hobby seems to be trying to bed Toby, Toby struggles to get his vision onto the screen. A counterfeit DVD sold by a local gypsy of Toby’s student film from ten years earlier, titled The Man Who Killed Don Quixote, sends Toby back to a simpler time where he made art for fun. Deciding to get a break Toby returns to the small Spanish village where he cast his student film to see if the young girl Angelica (Joana Ribeiro) or the old shoemaker who he cast as Don Quixote (Jonathan Pryce) were still around. He discovers that Angelica is in an abusive relationship with the Russian Oligarch Alexei Milskin (Jordi Molla) and Don Quixote thinks he is Don Quixote and mistakes Toby for his trusted sidekick Sancho. An adventure starts that sees Toby arrested, freed by Quixote who attacks the police, and slip in and out of the Sancho role as the heat and conditions start to take an effect on him, culminating in a huge medieval party that is just pure Gilliam. 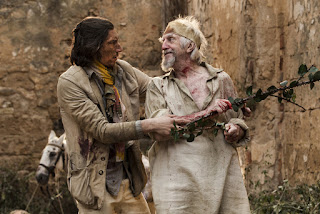 The Man Who Killed Don Quixote is just wonderful. It is charming, and funny, and sad. It has nods to Gilliam himself and to his struggle to get the film made at all. It has wonderful nods to Lost in La Mancha, the documentary that chronicled Gilliam’s first attempt to make this film with Rochefort and Johnny Depp, (read my review on that here). It pokes its nose at the state of modern politics. But most of all it takes you on multiple journeys; through greed not being good for the soul, through an unlikely friendship, and it tells a love story, conventionally about Toby and Angelica, but also about the relationship between Toby and his creation Don Quixote, and about Quixote from the book and Sancho. The oldy-worldly looking windmills that Quixote tilts at set against a backdrop of modern-day windfarms, and the way the stories told affect the characters means they are all right, Don Quixote will live forever.

Jonathan Pryce as Don Quixote is just perfect in the role and gives you one of the best performances of his already illustrious career, backed up by Adam Driver who impresses me more and more every time I see him on screen. They are famously not the first choices for their respective roles, but I promise you it was worth the wait to see these two men play the parts that maybe they were born to perform.

Terry Gilliam has taken an ambitious modern interpretation of Cervantes hero and created a modern-day masterpiece that had me giving a one-man standing ovation in my living room and I can only hope you all get to experience the adventure of Terry Gilliam’s, and also my, lifetime.

Note: The Blu-ray below is the Spanish one that Steve watched. The film has not yet been released in the UK. Booooo to the UK distributors.