Book - After the Eclipse 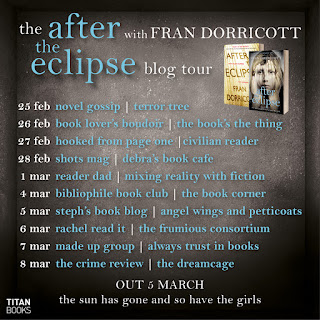 "Two solar eclipses, two missing girls." Thanks to Titan Books, we're excited to be the last stop on the blog tour for Fran Dorricott's debut novel After the Eclipse. To give you a taster, here's an extract from the book itself. Grab a cuppa and have a read...

Even as I said it, I knew it was a lie. There had never been a bigger lie. There might have been a time when I’d even believed it, believed completely that Marion was nothing but a friend. A source I could use for my job. A remainder from my old life – from the life before Olive disappeared. Nothing more.

But I knew that wasn’t true any more. If it ever had been. I still felt the same way about Marion Adams as I had when we were thirteen. The emails, texts, telephone calls over the years – they’d made her a part of my routine in a way that was removed, boring, stagnant even. But Marion wasn’t any of those things.

She was safe. Seeing her always felt like coming home; she was beautiful and capable. I wanted her to be mine.

“Are you still with me?” Henry’s voice snapped me back to the present.

“I said I was going to ask you to come home – to London. To stay with me.” He paused, watched as I flinched.

“That’s not my home any more,” I said. It was the truth. “Maybe I wanted that before I came back here. Wanted things to stay the same. But they can’t. I’ve seen...” I couldn’t put it into words. How I’d seen my future, what could be, in Marion’s eyes when she laughed and in the curve of her neck and the mole on her chin... “I’m moving on.”

I glanced from side to side, suddenly aware of how loud he was speaking. I was totally fine with being Out and Proud, as Henry called it, in London. But up here it felt different. Smaller. Closer. Less forgiving.

I remembered the way my mum had looked at me when I’d told her about Marion. This was years after that summer, a long time after Olive was gone – and I’d needed to tell somebody. That was the first time I really felt angry at Olive, because when she’d been taken I had lost my sister but I’d also lost Marion. Lost what could have been, whatever had been growing between us during the darkness of the eclipse.

I told Mum that Marion and I had been more than friends. Mum had been angry. Not just angry but livid. Then quiet. So quiet. I’d carried that with me for a long time, aware that my sexuality was still a big deal to some people. Henry had normalised that. He had supported me. He knew what it had taken to come back to this town, afraid that Marion wouldn’t want to connect in an offline world.

Henry was right, though. I hadn’t moved on. Smug bastard. “I don’t want to ask Marion on a date,” I lied, pushing back the inevitable for another day. “It’s not like that.”

Henry shook his head. “But don’t you want it to be?”


Thank you again to Fran Dorricott and Titan Books for allowing us to run this extract from Fran's latest novel After the Eclipse. The book is now available and remember to check out all the other websites on the tour.