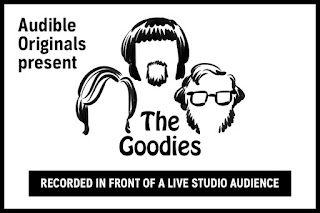 This year … in Britain’s hour of need … who can save us?
The answer lies behind a Union Jack waistcoat, a pair of bushy sideburns and a shaggy mop of hair.
No, it’s not the Duchess Of Westminster ...

THE GOODIES are back!

It's been over 30 years but the Super Chaps Three have finally returned, in a brand new radio-style adventure brought to you by Audible Originals.

TIM BROOKE-TAYLOR, GRAEME GARDEN and BILL ODDIE climb back on their trandem, equipped with a fourth saddle for their special guest JOANNA LUMLEY, in a special show which is being recorded for release later this year.

As Parliament falls apart and sinister dictators threaten the world, Tim, Graeme and Bill must save the day.


They defeated Kitten Kong!
They stuffed the Funky Gibbon!
They invented Ecky Thump!

Performed in front of a sold-out live studio audience next week, this hilarious hour of Goodies Goodness is being recorded as a radio show by Audible Originals and we'll let you know as soon as it is available.

THE GOODIES
Live In Your Ear

Directed by
DIRK MAGGS
Email ThisBlogThis!Share to TwitterShare to Facebook