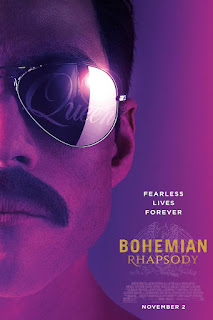 "I see a little silhouetto of a man." That man is Steve Taylor-Bryant and he watched Bohemian Rhapsody...

I’ve managed see all the Best Picture nominees from this years Oscar Awards, with the exception of Green Book. I've enjoyed all of them for different reasons and I can see why all were nominated for the industry's highest award. Except for Bohemian Rhapsody.

Bohemian Rhapsody is an anger-inducing mess of a film not deserving of the hype, except for the excellent Rami Malek who, to be fair, needs his performance of Freddie Mercury picking up and placing into a much better made film. Malek was exceptional as Mercury, the look and voice were incredible, sidestepping the parody they could have been, and his movement and mannerisms were a joy to watch. It’s just a shame Malek’s obvious research and effort wasn’t backed up by anything or anyone resembling a good filmmaker.

Here was a complicated man in a simplified story that came across in parts as lazy, parts as offensive, and seemed like a vanity project by two members of a band that wanted to protect their and Freddie’s legacy, but the finished film seems more in line with making May and Taylor look good and damn the rest. To deal with the lazy first - the early experiments needed more time; to put in a tiny 30 second segment showing coins on a timpani or shakers on piano screens does a massive disservice to talented musicians who changed the face of what popular rock music could be. The arguments with their record label executive needed more time; the less than two minutes about the power and influence the film's title track would have was crammed in just so some meta joke involving Mike Myers, the executive, and his classic scene from Wayne’s World would come across? Wasted opportunity to delve into the difference between the artistic forces and the bean counters which could have been very interesting for people who don’t know how the music industry works. It’s a joke that backfired in a film that wasn’t being taken seriously by anyone except Malek and Lucy Boynton who plays Mary. A crap attempt at a cheap laugh.

It’s the treatment of Freddie Mercury and his life that I take umbrage at though, it contains such little actual insight into his creative process. Showing Freddie’s homosexuality as the reason for his almost fall from grace, rather than showing it as being his true self and allowing him to revel in his flamboyance, I think was a huge mistake. Showing his dying of Aids as a punishment for the way he led his life was criminal. Freddie, and who he was, is what makes Queen and the context I got from the film deserves to be left in the 1980’s rather than in these more enlightened times. Whose fault that is is anyone’s guess. I didn’t think it went anywhere near even trying to capture the complexities of Freddie, of the band, of the era even, it’s more ‘an idiot's guide to the timeline’. The answer was to pick parts of the band's ethos that got them to that Live Aid point, the way they made music covered in 30 second snippets so you could move on to the next glorious party scene wasn’t the way. 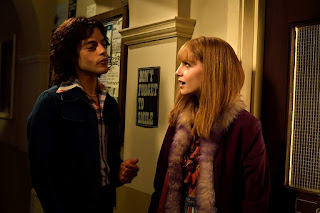 And Mary Austin gets shoddily treated for the majority of the script, despite the best efforts of Lucy Boynton. This woman was so close to Freddie, so important, she is his legacy, she holds half his estate, and the happiness he found with Jim Hutton gets little more than lip service, the film deciding to take a gossip magazine look at Paul Prenter’s interpretation of life with Freddie instead. The tabloid take on Freddie Mercury throughout this script is despicable. Yes, he had faults and partied but to concentrate on that one element and show that as his sexuality instead of concentrating on the good relationship with people made it uncomfortable for me to watch.

I’m not blaming Dexter Fletcher, who stepped in and took over a troubled production at short notice, but the first director should never have been chosen in the first place, the director of photography Newton Thomas Sigel should never have been left in the position of trying to keep the film going by a greedy studio who, time and again, have shown themselves to be almost anti-art, the script should have been given a polish by someone who may have picked up on how direly the important things were being portrayed and there should have been more effort on story and less on whether Brian May’s guitar looked right! The entire movie feels like it was made for Brian May and Roger Taylor and not for a public audience and, to be quite honest, everyone’s delight in them being so heavily involved is half the problem, they shouldn’t have been allowed anywhere near it.

Malek is deserving of any plaudit or award he gets, it’s just a shame such a career defining turn should have been in such an offensive look at the history of a band whose back catalogue deserves better, even if the surviving members do not. Watch for a very talented Malek, or if you can’t find Queen greatest hits album, but don’t expect fair, good storytelling; the film is little more than tabloid fish wrappers.