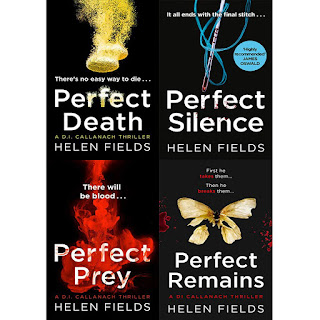 It's a notable event when Steve Taylor-Bryant agrees with someone. When that someone is his wife then it's really worth writing about. So here's Steve's article on what they agreed about - the D I Callanach books of Helen Fields...

It’s not often my wife and I recommend books to each other due to our tastes being so different but on a rare occasion something sparks some excitement and a title gets given. On One of these rare occasions my wife had gasped and sighed through a novel by Helen Fields and immediately bought another, and another, then another and when a series of books grips someone like that you can’t help but take notice. I asked the simple question “what was that about?” And twenty minutes later I’d still not got to the end of wife’s excited explanation and if I’m honest I’d stopped listening. So, I decided to find out for myself and borrowed one of the titles. Mistakenly I picked up book 2 of the series but that didn’t matter as any salient details were covered and off I went on a murderous adventure through Edinburgh. Then another, then another, and... well, you can see where I’m going here, can’t you? I’ve now read the first four Callanach novels and am waiting impatiently for book five in April, and book six later in the year.

The D.I. Callanach books, Perfect Remains, Perfect Prey, Perfect Death and Perfect Silence are an astonishing read. Normally these quickly produced crime thrillers are the literary version of a half decent police procedural television show, enough plot to keep you vaguely interested but it’s mainly about action or a romance or something. With the D.I. Callanach series you are getting crime thriller writing of the very highest order. In Luc Callanach Fields has created a flawed character trying to rebuild his life after a false accusation of sexual assault had wrecked his job with Interpol. Half French Half Scottish and with the career in tatters Callanach has moved to Edinburgh to start again. Despite the Scottish DNA Callanach is not as well received as one would hope to be amongst new colleagues and has to hit the ground running due to some horrific crimes. Across the books you learn more about Callanach and the events that led to his fall from grace, but also about the mental and physical toll this period of his life took on him. His partner, Ava Turner, is more than mere fodder for the main protagonist as in some novels and is pretty much as integral to the series as Callanach himself and their relationship is full of the ups and downs you will recognise from your own life making two murder squad detectives highly relatable and thus in turn leads to the books becoming quite personal and not just a crime thriller you may be reading.

It’s this way of writing and character building that Fields needs commending for because now you care deeply for her cast she can destroy your emotions with some of the most twisted and yet remarkably clever crimes I’ve read for a long time. This is not a place for spoilers but on more than one occasion I’ve worried for Helen Fields sanity, I’ve worried for the reputation of Edinburgh which has now become the Murder Capital of the world in my eyes, and I’ve tried to work out how one author can plumb to such depths of depravity and yet still entertain. How can you be so ruthless and intelligent in the darkness on the page and yet be so prolific releasing two books a year? I don’t know but, hand on heart, Helen Fields scares me like no other woman and I have a wife and daughter! Perfect Crime, the fifth instalment, comes out in April but, if you get the chance, read these four remarkable crime thrillers first. Start with Perfect Remains and go from there but don’t be surprised if book three, Perfect Death, instantly becomes your favourite.

The D.I. Callanach series are relentless in their pacing, unrivalled in their intricate plotting, and will make you worry for the author.