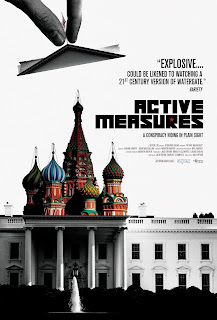 The critically acclaimed documentary Active Measures, which focuses on the controversy surrounding Trump and Putin, will be released in the UK in next month. Watch the trailer...

Active Measures chronicles the most successful espionage operation in Russian history, the American presidential election of 2016.

Filmmaker Jack Bryan (The Living, Struck) exposes a 30-year history of covert political warfare devised by Vladimir Putin to disrupt, and ultimately control world events. In the process, the filmmakers follow a trail of money, real estate, mob connections, and on the record confessions to expose an insidious plot that leads directly back to The White House. With democracy hanging in the balance, Active Measures is essential viewing. Unravelling the true depth and scope of ‘the Russia story’ as we have come to know it, this film is a jarring reminder that some conspiracies hide in plain sight.

Active Measures tells the story of the interconnected rise of Donald Trump and Vladimir Putin, while exposing the largest and most effectively executed espionage operation in history. An ambitious KGB colonel, Vladimir Putin, rises from anonymity to become the president of Russia. By taking control of the media, cracking down on dissidents, and using the Russian Mob as a branch of the government, he manages to turn Russia into his personal Mafia state.

Director Jack Bryan said: “I hope that audiences learn the unfortunate lesson that we learned making it, that democracies are fragile. They don't stick around long if they aren't fought for, and, right now, democracy, worldwide and in America, is on the decline. It is our duty and our salvation as citizens to fight this slide into nationalism and kleptocracy for ourselves and future generations. If we do not stand up now, democracy itself could easily become a thing of the past.”

Active Measures premiered at Hot Docs Film Festival in Toronto 2018, and will have special screenings at the European Parliament in Brussels this April and at the Riviera Film Festival in May this year and is out on VoD on Amazon, iTunes and other platforms in the UK on April 1st.