Film - Educating Omand, Screen Edition: Up In The Air 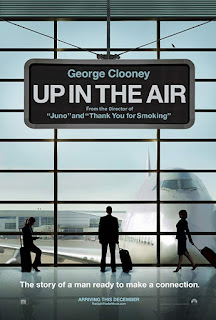 Some actors' work guarantees a box office hit, winning awards and critical acclaim, with films that everyone has seen. Everyone, apart from Susan Omand. So we set her homework to catch up. This month it's all Up In The Air for Vera Farmiga...

I must admit I’d never even heard of Up In The Air before it cropped up on my To Watch list as the title to see for Vera Farmiga’s performance and, watching the trailer, that surprised me. I wonder what I had been doing in 2010 to miss a comedy starring George Clooney and Anna Kendrick, both of whose work I enjoy, alongside Farmiga?

Anyway, I’ve watched it now and… yeah, it was ok. I definitely wouldn’t say it was a comedy, it didn’t seem to be out to make me laugh (although I do have a weird sense of humour so I maybe missed it), but I don’t know what genre I’d say it was, it just was. The idea of the story, that business bosses can hire someone to fly in and sack people, was intriguing and the enforced “progress” of test-running an attempt to do the same job over a videoconference call definitely resonated with the ex-IT employee in me. I’ve seen similar things so many times as corporations try to use new tech just because it’s new tech rather than working through the appropriateness or otherwise of using it – in this case, by further depersonalising an already impersonal, difficult, life-changing task and removing the courtesy of someone, anyone, even showing up to do it.

Thinking about that, this film was probably more about the people than the plot, which was, let’s face it, a bit one dimensional. We have Ryan Bingham (George Clooney) who spends his life, between his termination job and as a public speaker, flying from place to place – hence the Up in the Air title I guess – so much so that he has given up on having a home as such and lives out of a suitcase. Because of this itinerancy, as well as the dissociation required for his job, Ryan has pretty much given up on his own personal relationships. Then there’s Natalie Keener (Anna Kendrick) the keen (sic) young upstart of the company whose idea it was that the job could be done via video link, and it’s up to Ryan to take her with him on a few company visits for a week so she can actually see what the job involves and why Ryan believes the “progress” to be a bad idea. The dynamic between the two of them is great, with Ryan’s experience and cynicism knocking the idealistic corners off Natalie as the week goes on. These visits also allow for a plethora of star cameos as the likes of Zack Galfianakis and J K Simmons get to over-dramatise as the terminated employees. Add in the fact that Jason Bateman is the boss of the termination company and the god that is Sam Elliot as an airline pilot and there was hardly a face I didn’t recognise.

Apart from one. Yes, I am that person that hadn’t seen Vera Farmiga in anything, hence the reason for watching Up in the Air in the first place. And, in a word, she was brilliant. She plays Alex, an executive that Ryan Bingham meets in an airport lounge, hooks up with and, over several meetups in different cities as their jobs cross paths, falls for in a big way. Hers was a role that could so easily have tipped many ways; she could have played it sleazy and over-sexualised, she didn’t; she could have been simperingly over-emotional and romantic, she wasn’t; she could even have played the cold-hearted manipulative bitch, but she wasn’t that either. Instead she came across as an independent-minded adult, yes, having fun but never making more of the situation than it was and, to be honest I’m struggling to think of an actress who could walk that same line so successfully.

So yes, Steve, you can call me educated this time and I will be on the look out for more of Vera Farmiga’s work. And you, dear reader, can find out yourselves what you think of the film as it’s due to arrive on Amazon Prime next week. After I went and bought the DVD because it wasn’t available to stream anywhere. Typical.