Film - The Ides of March 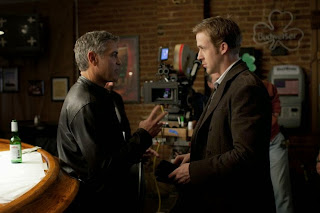 The 15th is officially the Ides of March, so here's a reminder of Steve Taylor-Bryant's thoughts from a few years ago on the film of the same name...

The Ides of March is written by, directed and stars George Clooney as Governor Mike Morris, a presidential hopeful in the forthcoming Ohio primary to gain the Democratic nomination to run. Full of ideas that others have been scared to suggest Mike is closing in on the win and only needs the support of Senator Thompson played by the very underrated Jeffrey Wright (Casino Royale) and his 358 delegates. The sticking point is Senator Thompson wants a cabinet post and Governor Morris wont commit to one. The Governors campaign strategy is being run by campaign manager Paul Zara.

Philip Seymour Hoffman puts on one of his best performances to play Paul, a man of loyalty and integrity that would give his soul for the Governor to win.

Press Secretary Stephen Meyers, played by Ryan Gosling (The Notebook, Murder by Numbers) is the young up and coming political brains who’s charm helps everyone to like him and pretty much follow his will. Stephen though falls foul of the Governor and Paul when he takes a meeting with the oppositions campaign manager Tom Duffy who offers Stephen a job. Although he declines the job the secret gets out and Stephen is unceremoniously fired from the Morris campaign. Unbeknown to anyone Stephen had been having an affair with a young intern, Molly, who’s father is the chairman of the democratic party. Its not just Stephen Molly has been sleeping with and she shares the secret that the governor had got her pregnant and that she didn’t know what to do.

A film about loyalty, politics, love and friendship, business and personal relationships stretched to breaking point, The Ides of March is superbly written, passionately directed and an all star cast really bring the story to a believable level. When you think that outstanding actors such as Paul Giamati, Marisa Tomei and Gregory Itzin only have small cameos but light up the screen you can see how wonderful the main stars are. Ryan Gosling I have found to be an OK actor, the Notebook was enjoyable fare but I had worries that a step up in class to a movie such as this would be a step too far.

I’m glad to say how wrong I was, his performance was powerful and he added the gravitas to the role that was needed.

George Clooney is fast becoming the best actor turned director in the business, with such films as Leatherheads, Confessions of a Dangerous Mind, and the awesome Good Night, and Good Luck already under his belt, he his rapidly chalking up many great directorial pieces and will be soon acclaimed in the same breath as Clint Eastwood possibly the most successful actor/director known.

You don’t have to like American politics to enjoy this film as the tagline reads “Ambition seduces, Power corrupts” now who’s not up for a film like that?