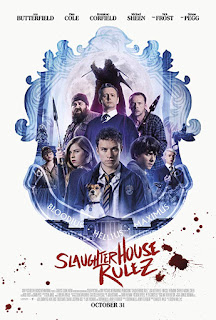 School's a bloody nightmare says the tagline but was the film? Steve Taylor-Bryant watched Slaughterhouse Rulez...

"That hole is a gateway. And it leads straight down to hell. Now, who wants to buy some drugs?"

I’m not a huge horror fan and, of the Cornetto Trilogy, it was Shaun of the Dead I found to be the weakest so, when a horror comedy starring Simon Pegg and Nick Frost finds its way into my TV, I’ll be honest and say I wasn’t expecting much. However, to be fair to Crispian Mills, he’s written and directed a great little movie. Adult cast-wise, I wish there had been a little more of Nick Frost’s hippy anti-fracking Woody as Frost was truly funny, the scene with the world's biggest magic mushroom had me laughing hard. Simon Pegg I found less annoying than usual but that's probably because, if something emotionally or physically painful could happen to one person, it happened to his Meredith Houseman and who doesn’t enjoy seeing Simon Pegg being put through the ringer? The biggest disappointment of the whole film for me was the headmaster Michael Sheen. I am a huge Sheen fan but just don’t buy him as upper class enough or corrupt enough to be the Principal of a private school this magnificent and in the pocket of a fracking company, but that’s a minor quibble in an otherwise enjoyable film that is rightly stolen by the kids of the film (and an on Skype Margot Robbie who tortures Pegg).

Fish out of water northern normal boy Don Wallace (Finn Cole) is forced into the private school by his over eager mother and ends up with roommate Willoughby Blake (Asa Butterfield) whose previous roommate had suffered horrendous bullying at the hands of their house guards and had taken his own life. Whilst discovering what they are about as friends and people, the boys come across a sinkhole from the fracking and, from there, horrific monsters are unleashed terrorising the school and killing anyone in sight. With a little band of friends and some luck they try to survive the night.

I can’t decide whether the private school elements of the film are realistic or not, barely getting through comprehensive school myself, but it seems accurate enough from media reports into real schools and whilst some of the goings on might be exaggerated for comedic value there is probably a lot of uncomfortable truth in the scenes. It’s Butterfield who excels in these moments, capturing loneliness, grief, depression, and bullying victim brilliantly whilst hitting all of his comedic marks and showing a real chemistry with Cole, who stuck me as a young man with a huge future.

The script is ludicrous and often-used horror and comedy tropes are evident throughout but the young cast breathe fresh air into even the most tired of moments and, alongside the Pegg torture, elevate Slaughterhouse Rulez above the level it would probably be in lesser hands. It’s far from complicated but the funny moments are genuinely good and the cast show some fine skill. I wouldn’t rush out and spend big money watching it but should it happen upon your TV in the future it is a pleasant way to spend an hour and a half.