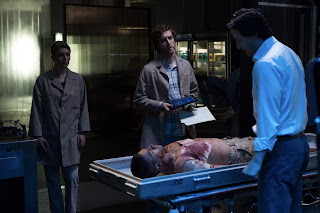 "Family, loss and the dangerous questions surrounding emerging scientific technologies." Starring Keanu Reeves, watch the trailer for Replicas, coming to Digital, DVD and Blu-ray next month thanks to Lionsgate UK...

At a medical research facility in Puerto Rico, daring neuroscientist Will Foster (Keanu Reeves) is on the verge of successfully transferring human consciousness into a robot when his family is tragically killed in a car crash. Not wanting to say goodbye to his wife (Alice Eve) and three children, Will recruits his colleague Ed (Thomas Middleditch) on an audacious mission to preserve their minds and transfer them into secretly-grown clone bodies.

Soon discovering that playing God has its downsides, Will battles against the clock and the physical laws of science themselves to resurrect his loving family. When success appears to be within reach, Will finds himself pitted against a sinister government-controlled laboratory and a shady police task force who will stop at nothing to find the key to the incredible scientific breakthrough…

Directed by Jeffery Nachmanoff (The Day After Tomorrow), the film stars Keanu Reeves, Alice Eve, Thomas Middleditch and John Ortiz and is out on Digital Download from 22nd April and Blu-ray & DVD from 29th April.