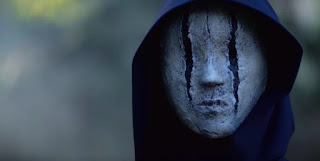 Steve Taylor-Bryant tries to decide if The Order is really chaos...

Okay, so a new one on me. Trying to review a television show on Netflix that you have thoroughly enjoyed, you want to tell people how much enjoyment you got from said show, but when you’re honest with yourself you know deep down the show is actually very bad and you should in no way recommend it to anyone you even remotely like. I am talking of course about The Order, a show about a secret society in a university in America that has golems and werewolves and such like.

When Belgrave University student Jack Morton joins a fabled secret society, the Hermetic Order of the Blue Rose, he is thrust into a world of magic, monsters and intrigue. Out to avenge his mother's death, he uncovers dark family secrets and lands in an underground battle being waged between werewolves and practitioners of dark magic. Assisting Jack in the fight is Alyssa, a tour guide at Belgrave and fellow member of the Order, which is led by Jack's estranged father.

I mean, come on! Just look at that synopsis, if there was ever a show designed to fill the hole that Supernatural is going to leave when its over it should be this one, but it's horrible on every level. The writing is generic bordering on parody, the acting? I’m not sure if its really bad, bad because the cast aren’t taking it seriously, bad because the cast are taking it seriously, or whether in actual fact we are supposed to be viewing it as a comedy. Cinematography wise the show is excellent, I recently upgraded to a 4K television and The Order is genuinely very nice to look at, but my word the writing and the acting is so bad. Its as if the cast and crew of a soap opera like Home and Away decided they’d try their hands at horror instead of milkshakes and surfing. And yet here I am approaching the series finale and I am already Googling whether there is going to be a second series because I am a bit in love with this show.

Normally about now in a review I would be giving you the plus points, even in something I haven’t enjoyed there is normally one or two, but I genuinely cannot with my hand on my heart give you anything that may lead you down a path where you watch The Order because I said you should. Despite rumours to the contrary I can quite tolerate a few of you. But, remember back in the day when we all watched Power Rangers despite how utterly crap it was? Yeah, same thing here. If you don’t mind terrible writing poorly executed and hilarious in its seriousness, then give The Order a go.

But you cannot blame me, I’m easily pleased by shit like this.