Book - The Art and Making of Aladdin 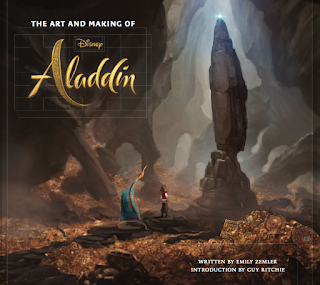 Today sees the publication by Titan Books of their latest film tie-in book, The Art and Making of Aladdin, written by Emily Zemler...

The Art and Making of Aladdin treats Aladdin fans to images that capture the visual majesty and behind-the-scenes accounts of the film’s fascinating development and production.

Fans will discover how the streets of Agrabah come to vibrant life in the thrilling live-action adaptation of Disney’s 1992 classic, Aladdin, the exciting tale of the charming street rat Aladdin, the courageous and self-determined Princess Jasmine and the Genie who may be the key to their future.

The Art and Making of Aladdin moves beyond a simple commemoration. It is the definitive chronicle of hundreds of people’s shared mission to re-imagine a beloved film in a completely new format.

Celebrated for its unwavering dedication to quality, Insight Editions is a publisher of innovative books and collectibles that push the boundaries of creativity, design, and production. Through its acclaimed film, television, and gaming program, Insight strives to produce unique books and products that provide new ways to engage with fan-favorite characters and stories. Under this program, Insight has published books covering the worlds of Star Wars, Game of Thrones, The Walking Dead, Destiny, Assassin’s Creed, Halo, Diablo, World of Warcraft, and the Harry Potter films, among many others.

Emily Zemler is a freelance writer and journalist based in London. Her work has appeared in Billboard, SPIN, The Hollywood Reporter, the Los Angeles Times, USA Today, Paper, American Way, Nylon, and Relix.