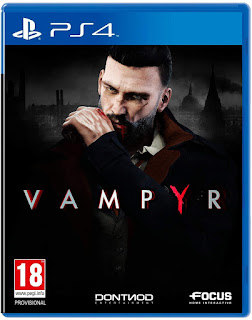 David Ames gets his teeth into last summer's Vampyr from Dontnod on the PS4...

Let me tell you a story. If you have read my articles before, you know that I have a certain…penchant for Vampires. When I was younger, probably around 8, I first read Dracula, and I was awestruck by the idea of a vampire. As I grew older and began to read more and more from the genre, especially the Anne Rice Vampire Chronicles, my love and, some might say obsession, was cemented.

Ever since then, I have immersed myself in all things Vampire related. That means music, movies, novels, games, and role-playing games like Vampire: The Masquerade. This is the reason why when I first heard that Dontnod Entertainment was developing an open-world Vampire game, I was over the moon. As delay after delay unfurled I became incredibly worried about what would come of a game that seemed designed solely for me. Luckily, after waiting for what seemed like far too long, Vampyr was finally released in June of 2018.

What I was greeted with was pure visual splendor. The graphics are incredible and have a very artsy quality to them, loose and borderline sketched in an interesting way. Some people have complained about the visuals but they were worth all the money and time I waited.

This story follows Dr. Jonathan Reid, a doctor in London during the Spanish Flu epidemic of 1918. As we progress through the story, Reid is bitten and transformed by an unforeseen elder. The story then deals with a wonderful duality which focuses both on his need to save as a doctor and his need to feed as a vampire. The story flows through multiple areas of London (which were researched very thoroughly by the production team so that early 20th century London is historically accurate) and as the game progresses, you as the player are given complete control over Reid’s actions and choices.

You are tasked not only with saving the patients of a nearby hospital but also with caring for the health of all those citizens throughout the city. You must do so while fending off the Guard of Priwen, a religious organization full of zealots who hunt the vampire menace in London, and blame that for the sickness. The head of this order is a wonderfully colorful man who strongly resembles the famed Alexander Anderson from the Hellsing anime series. 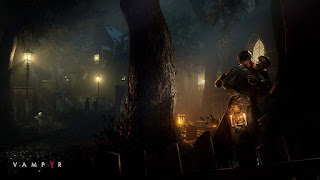 As the story progresses and you make your way through London, saving or killing as you see fit, a unique system of connections emerges. You meet people and through a system of conversational choices, you are able to open up different hints and personality traits. You do not have to kill anyone if you don’t choose, although the more blood you take in, the more you can level your character. The choices you make affect your character in ways that I’ve only ever seen done as well in Until Dawn. Also, in a stroke of genius, the game is only equipped with one save slot to ensure that each choice has a “real, meaningful impact” on the rest of the game.

There are certain characters who become main pillars of the community in each separate area of London and if things happen to these NPCs, your game will suffer or thrive. Each decision you make is wholly impactful and will determine not only how your ending develops but how others will speak and interact with you.

The story stretches forth as you learn to navigate both the medical and the vampiric world, making friends and enemies, and deciding who should live and die. There are twists and turns and emotionally resonant moments that make every aspect of the story resonate with the player.

Besides the story being fun and incredibly immersive, the environments are spell-binding. I know I already mentioned the visuals for this game but I have to restate the fact that they are so incredibly wonderful. They are immersive and interesting and fit strangely well with the overall vibe of the game.

One final point to make about the game itself is that the score is incredible. Olivier Deriviere has done a spectacular job, mixing industrial aspects of music with classical instruments such as cello, piano, and bass flute. It is strange and unnerving and wholly fitting for the game in question. I have downloaded it and I have streamed it at regular intervals because it is so wonderfully atmospheric.

This game rivals some of the best I have ever played and from the instant I started working through it, it became one of my favorites. I know that there have been complaints about the battle system, but after learning and adapting to this unknown setup, it became so much more enjoyable. If you like horror themed games, Victorian era London, and Vampires, as well as open world and free choice, this game is a must play. I only hope that Dontnod is working on a sequel. I haven’t heard anything yet but my fingers are optimistically crossed.