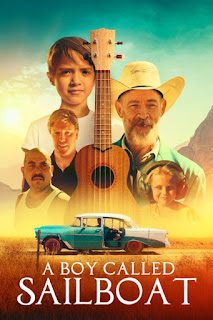 The Movie Partnership have announced that A Boy Called Sailboat, will be available on Digital Download next month. Watch the trailer...

In a slanted home beyond the reaches of a drought-ridden town, an isolated Hispanic family accept an impossible blessing and name their only son "Sailboat". Sailboat brought fresh love and hope to his family who have forged a simple but proud life in America, but one afternoon he brings home something more: a "little guitar". From this moment, Sailboat and his ukulele are inseparable, and when his ill grandmother requests he write a song for her, Sailboat meanders through adversity to deliver the unimaginable - the greatest song ever written.

Will the mysterious song breathe one last miracle, or reveal a hapless twist of fate that will return his family to a house held up by a stick; a car with no doors; an unchanging wardrobe; and a friend who can't blink..?

Written and directed by Cameron Nugent, the film features performances from Academy Award winner J.K. Simmons and Jake Busey as well as introducing Julian Atocani Sanchez as the eponymous Sailboat.

A Boy Called Sailboat lands on digital on 6th May.