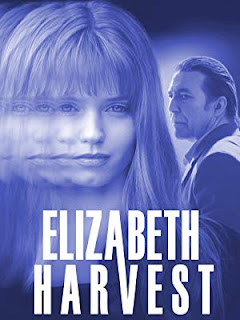 Henry, (Ciarán Hinds) an eminent, retired scientist, marries Elizabeth (Abbey Lee) a naive young woman, and takes her back to his isolated, state-of-the-art home in the mountains.

Her husband declares that all young Elizabeth sees in the house is hers to amuse herself with, but there is one room that he insists is for him alone and into which she must promise never to enter.

Of course, just as in the tale of ‘Bluebeard’ (popularized in the late 1600s by Charles Perrault) the young bride’s curiosity gets the better of her. The first time Henry leaves her alone in the house Elizabeth cannot resist entering the forbidden room. There she discovers that her husband has a terrible secret that entirely changes her perception of their relationship.

Since the beginning of cinema, directors have been drawn to the dark fairy tale of ‘Bluebeard’. The first version was made by Pioneer Georges Méliès in 1901, the last was Guillermo del Toro’s Crimson Peak. Writer-director Sebastian Gutierrez is the latest to tackle the tale in his film Elizabeth Harvest – a twisty, high-tech thriller with a modern horror sensibility.

Once Elizabeth is carried over the threshold by her doting spouse, she wanders after him wide-eyed as he opens each door to show off his stunning house and a room full of clothes made precisely to her taste and her fit.

She does her best to ingratiate herself with the ‘staff’ – the efficient, mysterious Claire (Carla Gugino, Gerald’s Game) who manages Henry’s house, and Oliver (Matthew Beard), Henry's blind son, who hovers noiselessly in the background, doing small chores and arranging flowers. At night she dumbly submits to Henry's sexual attentions.

When Henry is called away on business, the waif-like Elizabeth displays her first bit of autonomy and sneaks into his secret room. She finds it to be a laboratory which reveals a shocking discovery. When Henry returns and they are alone in the house, he instinctively senses the change in Elizabeth, and guesses her disobedience.

Events take a terrifying turn as, that night, Henry pursues Elizabeth around the deserted house and finally hacks her to death with a huge machete. The following day Henry, Claire and Oliver bury her bloodied body somewhere amongst the shrubbery. Logan, (Dylan Baker) a cop friend, shows up at the house, asking about Henry’s lovely young wife, but is told she is taking a nap. He’s easily satisfied and, after exchanging pleasantries, simply drives away.

However, now the plot takes an unexpected turn - the story spools back and begins all over again, with newlyweds Henry and his young bride Elizabeth again driving along the mountain road to his isolated, state-of-the-art home… 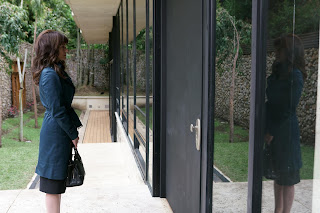 Elizabeth Harvest isn’t at all the simple story it would at first appear to be – it’s not a fairy tale warning young wives who have no power or economic agency that it might be in their interest to be wary and obedient. What it is, is a sci-fi story which deals with the notions of identity, possessiveness and masculine hubris, and examines how science and technology might allow humans to satisfy some of their most grotesque impulses.

Fans of horror-sci-fi who are finding the genre too predictable might like to check this film out. Each time the viewer thinks that events are beginning to tread familiar ground, the film takes a quick turn, sending us along a tangent we might not have been expecting. As the story unfolds, the script goes progressively deeper into the psyches and motivations of the four characters. Each of them revealing him or herself through their interactions and conflicts with the others.

Writer/director Gutierrez tells his story in flashbacks, cryptic exchanges, monologues and through the discovery of ‘housekeeper’ Claire's private diary, which serves to explain who she really is and what has been happening in Henry’s house. The complex structure of the screenplay is highlighted by Gutierrez's cinematic style.

Gutierrez and cinematographer Cale Finot explore the house with gliding and zooming cameras, evoking a sensation of luxurious, but sterile, hi-tech emptiness. To intensify the tension, they use split-screen in Henry’s murderous pursuit and eerie single-colour sequences in red, blue, yellow or green.

The small cast do their utmost with their characters - Ciarán Hinds again exploits his uncanny ability to flip from benevolent to coldly sinister. The often-underrated Carla Gugino imbues Claire with a queasy moral ambivalence and repressed anguish. Matthew Beard’s Oliver remains passively enigmatic, until he shockingly begins to act.

Abbey Lee as Elizabeth has the responsibility of carrying the film in the midst of these talented actors. Her previous film appearances were as a ‘bride’ in Mad Max: Fury Road and as an evil model in Nicolas Winding Refn’s The Neon Demon. In Elizabeth Harvest she resembles very much what she is – a fashion model - wafer thin, with huge eyes, silky hair, and a passively beautiful, bland face. In some ways, this is fitting during the early part of the film, when she asks Claire why an older, sophisticated and “marvellously smart” man would choose a “very simple” girl like her for his wife? “I don’t know,” Claire answers enigmatically, which pretty much echoes the viewer’s opinion.

Lee gives it her best shot, but her exquisite vapidity becomes a disadvantage when her role requires her to be more proactive, as it makes it difficult to enthusiastically root for her.

Another downside to the film may be that some sci-fi fans might find it longwinded - but what Gutierrez is offering is a complex, slow-burn mystery, punctuated by moments of shock or violence, rather than a fast-paced action thriller. However, there are many aspects of Elizabeth Harvest that are interesting and enjoyable - it is gorgeous to look at and offers the challenge of unravelling an intriguing puzzle and moral conundrum.