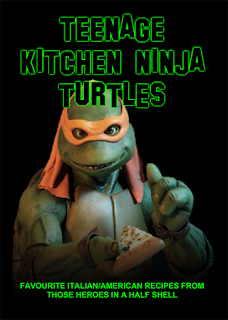 There’s a new comics related recipe book in the works from those heroes in a half-shell...

Following on from the great success of the Hannibal Cookbook and the recipes from Elder Scrolls, both of which we have reviewed previously on The DreamCage, we have heard today that the Teenage Mutant Ninja Turtles franchise is next for the foodie spin-off treatment.

The subject is, of course, Italian food, with each of the main characters from the series getting their own section of the book.

First up, as head of the Ninja Turtles team, Leonardo starts us off with a highly decorative and finessed selection of delicate soups and antipasti – small plates of tasty morsels to sharpen the palate and look just as good as they taste.

Next we get Donatello’s chapter and, being the inventor of the group, we have a selection of unusual sauces to go with pasta, using combinations of food that you might not otherwise consider as well as the classics such as Spaghetti Vongole, Ragù Napoletano and Pesto alla Genovese.

Raphael with his trademark New York accent and fiery nature, so suited to a restaurant kitchen, gives us our main meals, with meat, fish and vegetarian all covered in the recipes, and all with an Italian/American twist, so expect exotics such as Eggplant Parmesan, Sausage & Peppers and Baccalà.

It wouldn’t be a Ninja Turtles recipe book without pizza and that’s where Michelangelo’s chapter excels. From Calzone, to thin crust (Neapolitan), to deep pan (New Yorker style), there’s a recipe for everyone’s favourite base and so many topping suggestions that you won’t know where to start – classics like meat feasts, vegetarian supremos, quattro stagiones and the plain old margarita all figure, along with some of the more unusual combos that you’ll have seen being ordered in the comics, cartoons and films – Pepperoni & Pickle, Peanut Butter & Clam and Tuna & Sauerkraut… seriously, don’t knock it until you’ve tried it.

It’s not just the Turtles who get to go wild in the kitchen in this book, as there’s a section on fusion food from Master Splinter, some interesting slaws and salads from Shredder and some hardcore drinks from BeBop & Rock Steady, including a wicked looking green cocktail they’ve called Ooze.

Dessert lovers needn’t despair either. Those of you with a sweet tooth will be also be well catered for in the section given over to the TMNT-friendly neighbourhood journalist. There's zabaglione, cannoli, tiramisu, gelato and other fluffy, creamy, sweet treat recipes in the final chapter of the book, which is titled April’s Fools…