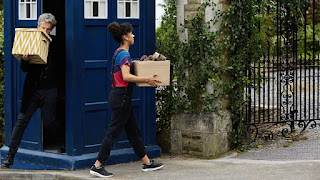 Our Doctor Who expert, Tony Cross, is journeying through all of time and space to bring us his thoughts on every available Doctor Episode. Today is the Twelfth Doctor adventure, Knock Knock...

Sorry, I couldn’t help myself.

Anyway, Knock Knock is the fourth story of Series Ten. It’s written by Mike Bartlett and is directed by Bill Anderson. It’s got David Suchet in it as The Landlord, which I was so tempted to assume was a renegade Time Lord with low ambitions. It’s a creepy house mystery. And it doesn’t quite do it for me. It’s not a bad story by any stretch of the imagination. It’s entertaining enough, but it never quite gets let off the scary leash enough to be a classic.

Indeed, it reminded me a little of ‘The Horror of Fang Rock’, which terrified me as a child. Perhaps forty years later – and we’re talking 1977 to 2017 here – there’s a six-year-old pretending they need to go to the loo in order to escape the scary telly they’re watching, but who isn’t scared enough not to still want to watch it through the crack in the door. To the amusement of their Mum and Dad who saw through this transparent tactic rather quickly. Perhaps that six-year-old will be reassured, like I was, by their Mum saying ‘it’s not real, it’s just a TV programme.’ So, judging the scariness levels of Doctor Who is probably not particularly objective.

Also, I felt all the young people in this story were a portrayed as a bit dense and Bill was made a little less interesting. You know what would have been good? This as a Doctor lite story. A story where Bill gets to be the Doctor without making a Claraesque song and dance about it. Where – perhaps – she takes the loss of her mother and reaches out the The Landlord through that shared loss? Everything has its time.

There are some nice things in this story though. The fact that the Landlord was just a small boy when all this began and that at the end he crumbles back into that state. It’s a little heartbreaking. I love David Suchet’s performance in this. Yes, there are moments where he skates close to the line between nicely arch and ham, but he never steps over it entirely and the last scenes were – for me – genuinely upsetting. That poor little boy trying to avoid losing his Mum. Instead he’s made her a prisoner. Mariah Gale* does a rather fine job of making Eliza more than just a monster of the week. There’s a real tenderness to the end of their story. Everything ends. And that’s sad.

But I don’t know I’ve got a lot more to say about this. I do like Capaldi – as usual. The insect things look great but are a bit obviously CGI for my liking. Sometimes – and again perhaps this is because I am an old man – I would like more practical effects. But, for a one-off episode of Doctor Who perhaps that is asking too much.

I sometimes wonder if I am reviewing the episode I would like to have seen rather than the actual episode itself. That I’m not being fair because I’ve got an idea of what Doctor Who should be and that when the story doesn’t quite fit that it rubs against my critical faculties (which is less painful than it sounds.) I try not to do that, but I think that paragraph above on ‘The Horror of Fang Rock’ is a bit of a giveaway. I wanted The Horror of Fang Rock. This isn’t the it. But it is a reasonable effective, well-acted and well-directed tea-time horror story. And that’s not too bad is it. Not every Doctor Who story can be a classic after all.


*Mariah Gale was a rather fine Ophelia to David Tennant’s Hamlet.