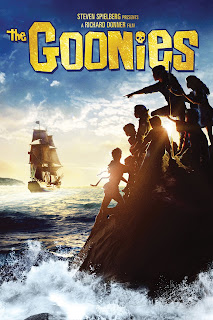 With the 4k restoration of The Goonies in cinemas from Friday, a reminder of Susan Omand's thoughts on the film...

It wasn't until recently that I actually got round to watching The Goonies. People have pointed and laughed at me for such an oversight, my friends have pitied me and even bought me the DVD, encouraging me on numerous occasions to “just watch it” so I finally did.

For those of you, like me, that don’t know the film, The Goonies are a bunch of kids that live in the Goondocks (hence the name) and are spending their last adventure together before they all have to move out, due to their houses getting demolished so the Country Club can build a new golf course. They find an old pirate treasure map in the attic and Mikey tells the others about the legend of One Eyed Willie, his pirate ship The Infernal and all the lost treasure on board, so the gang set forth to see if they can find the gold and use it to stop the foreclosure on their houses so they don’t have to move. The map leads them to an old unused restaurant, where they run into the Fratellis, a family of mobsters whose son, Jake, has just been broken out of jail. Cue a chase in underground tunnels avoiding the booty traps (I mean booby traps) as the Goonies try to find the treasure and the Fratellis try to find the Goonies until it all comes to the big final battle on the deck of the hidden pirate ship itself.

Yup, that about sums it up. It was an Indiana Jones film in miniature, with all the fun froth that entails, which kinda figures because Steven Spielberg wrote the story that Chris Columbus based the screenplay on. Columbus was also the pen behind Gremlins and I must admit to a smile when they were mentioned in an aside at one point. Yes, some of the One Eyed Willie, broken statue and lost balls jokes were sniggerworthy in typical schoolkid fashion but the rest of the humour was slapstick silliness - it was like Home Alone in a pirates cave (no, that’s not a good thing). But it was quite entertaining seeing known stars these days, such as Josh (Inherent Vice) Brolin and Sean (LOTR) Astin, starting out as youngsters.

But good grief those kids were annoying! Maybe I’m about 40 years too old to watch this film for the first time. Maybe, if I had the benefit of the rose coloured nostalgia specs of my friends, it would be the great movie that they really built it up to be. Or maybe, just maybe, it’s only an OK film about pirate treasure*.

*waits for the internet to explode.