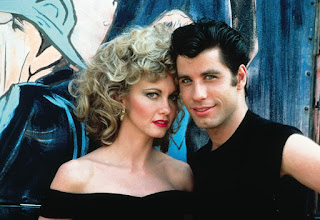 With the news that a prequel to the film is in the works, a reminder of Susan Omand's thoughts on the 1978 hit film Grease...


“This car could be systematic. Hydromatic. Ultramatic. Why it could be greased lightning!”

It’s 1978. We were still pining for the very long very hot summer of 1976 and street party bunting from the Queen’s Silver Jubilee still hung around street corners like the Christmas lights that nobody bothered to take down. At least that’s how I remember it – all a bit depressing. So many great films also came out in 1978 that have since gone on my favourites list but at the time I was 9 (and three quarters) so films like The Deer Hunter, Convoy and Halloween hadn’t yet hit my radar, let’s face it I was traumatised enough by Watership Down, but a 1950’s based high school movie came out that year that kickstarted a few film careers and brought the fun back into summer.

In the summer of 1959, visiting Australian Sandy Olsson (Olivia Newton-John) meets local boy Danny Zuko (John Travolta) at the beach and they have a holiday romance BUT on the first day of their senior class at Rydell High, Danny, who is the leader of greaser gang the T Birds, and has been boasting about the girl he made out with over summer, discovers that Sandy hasn’t gone home after all, is now in school and has made friends with Frenchy (Didi Conn) and the Pink Ladies. Sandy also tells the Pink Ladies about her “romance” and Pink Lady Rizzo (Stockard Channing), who realises it’s Danny Sandy was speaking about, arranges a surprise meeting at a rally in order to cause trouble. Danny acts indifferently towards Sandy at the rally in an effort to protect his cool and Sandy runs off in disgust. Later, at a party thrown by Frenchy, Rizzo starts to mock Sandy’s goodie two shoes image and the other Pink Ladies join in. Upset, Sandy runs off... again. Meanwhile, the T-Birds show up to crash the party and Rizzo goes off to be with Kenickie (Jeff Connaway) so they can make out, only to be interrupted by the Scorpions, a rival gang, whose leader Leo insults Kenickie's car making the T-Birds want to fix it up for a drag race, winner getting both cars.

The rest of the film follows the usual teenage parties, dates, bullying, arguments, angst and worries as the T-Birds and the Pink Ladies interact on different levels throughout the school year and the car gets fixed up into Greased Lightning for the race. Danny tries to get on Sandy’s good side by asking the Coach to find him a sport, then annoys her by winning the school dance-off with an ex-girlfriend. Rizzo believes she might be pregnant but spurns Kenickie’s attempt at “doing the right thing” and they fall out, with Rizzo claiming it’s not even his baby, and Frenchy wonders how wise she was to drop out of High School to go to Beauty School, only to drop out of there. 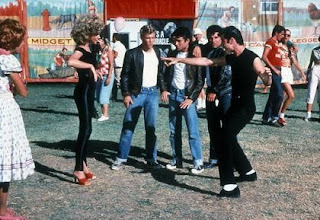 At the planned car race between The Scorpions and the T-Birds, Kenickie is knocked unconscious so Danny takes his place and wins the race while Sandy watches from afar. Realising that she loves Danny, Sandy decides to change herself in order to be with him and as the school year comes to a close, the students attend a carnival held on school grounds. Danny has earned a letter in Track, to impress Sandy. Rizzo and Kenickie get back together after she finds that she is not pregnant after all and Frenchy gets back into high school. They come across Sandy, now dressed in that tight, black outfit and smoking and, with her bad girl image and his “sports jock” image, she and Danny finally get together and fly away in the now, for some reason, magic Greased Lightning car.

I’m not saying the film was perfect – there were lots of issues with it if you break it down. Everybody seemed to ignore the fact that Travolta, as one of the youngest in the cast, was actually 23 when he was meant to be playing a high school kid. In fact the majority of the cast were a lot older than their high school character parts (Stockard Channing was over 30) so it wasn’t as “clean cut” off the set as it was on screen if the documentaries are true. On screen, stereotypes abounded and yes it was very VERY cheesy as a plotline, with even the seemingly darker side stories of how bad bullying and underage sex are (although smoking was still cool and rebellious) and the fact that you shouldn’t drop out of high school coming across as very moralistic. But, again, who cared? The 1950s setting was nostalgic enough to get parents into the cinemas, the songs were catchy enough to ALL storm the music charts, with 1950’s icons like Frankie Valli performing the disco sounding theme song written by the Bee Gees alongside other songs much more era specific. To be honest, Grease was Dirty Dancing way before Dirty Dancing was even thought of and everyone who was anyone at school (and me) bought the soundtrack album and wanted to be in one of the gangs with their names on jackets. It was fun, inconsequential froth that made stars out of the cast and it was needed to break the tedium of another British autumn.