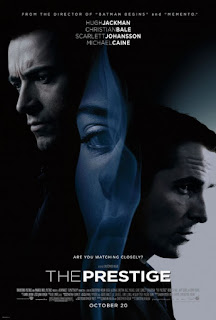 It's more than just smoke and mirrors as Kraig Taylor-Bryant looks at some of the themes in The Prestige (with spoilers)...

Ah, Christopher Nolan, there is something truly satisfying with returning to his way of making films. The artistic style of all of his movies, including Memento and Inception are what boggle the minds of his viewers and make you question the characters and their motives. In Memento, we question the main character because he is acting out of hatred for the man that killed his wife, with the fact that he can’t remember what he did five minutes ago as an added form of concern, because it makes us wonder, especially towards the end, if his ‘warpath’ with ever end. We can see a similar thing with Leonardo De Caprio’s character in Inception, because we find out that the very thing that he tries to do, so that he can see his children again, is what caused his wife to kill herself in the first place. The very same can be said for The Prestige, we question the motives of both characters, because one of them behaves questionably and a little recklessly to begin with and, after losing his wife, the other one begins to do the same.

The film is about two magicians, played by Hugh Jackman and Christian Bale, and how they both begin as co workers in a magic show, but an incident involving Jackman’s character Robert losing his wife, and assistant, to a magic trick in which she’s placed in a tank of water and expected to escape, leads him to grow to hate his partner Alfred (Christian Bale). Robert ends up believing that Alfred intentionally tied the wrong knot but, because Alfred wanted to try something new, he ended up tying a knot that Robert’s wife couldn’t untie. This leads to an ever-growing hatred between the two magicians, where one would show up at the other’s magic trick, and cause it to go wrong, leading them to get injured in the process. Eventually we would come to realise that one of them was in a cloning machine of sorts and would use one of these clones to make his “transporting man” trick work.

I think this is the beginnings of one of the central themes of the movie that became clear to me by the end of the film when Christian Bale’s character (or possibly a copy of him) says to Robert, after shooting him in the stomach/chest, that he doesn’t understand sacrifice, on the scale that Alfred had, for the magic, and that Robert did things that weren’t necessary.

The beginning of the theme of sacrifice is clear when we find that Alfred may have been willing to sacrifice Robert’s wife in order to do something new for a magic trick. I think this eventually leads Robert to be willing to do whatever it takes to be a better magician than Alfred, seeing this obsession of his, as a healthy competition, that he is willing to do anything, to win. When he finds out that Alfred is now living a happy life with a wife and a child, Robert begins to see Alfred as having “stolen his life”, and continues to believe this, even after falling in love with his own, latest “beautiful assistant” Olivia, played by Scarlett Johansson. Even when he has found his own happiness, he doesn’t think it is enough, and ends up demanding his girlfriend to go and spy on Alfred, to find out how he does his latest “transporting man” trick. This is one of the other signs of how Alfred has led Robert to begin sacrificing to be better than him, showing that he’s not doing it for the magic, but rather to just be better than Alfred. Olivia ends up leaving Robert after he asks her to do this task, because she realises that he is willing to send his girlfriend to do his bidding, like a lap dog, because he can’t let go of his wife’s death. What’s interesting though is that Robert doesn’t even believe that his wife is the reason he is acting like this, and that’s why she decided to actually leave him to be Alfred’s assistant. So, at this stage he was willing to sacrifice the girlfriend he had, to continue getting revenge on Alfred for his wife’s death. 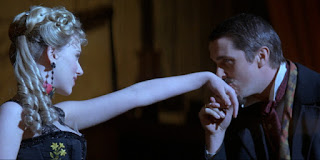 As the film goes on, Robert begins to sacrifice even more, during this feud between the two of them, gets so frustrated with the journal that he steals from Alfred, simply to find out how he does the trick, that he begins to go to even greater extremes, by burying the clone of Alfred, who everyone believes to only be a friend of his. Its at this moment that Robert has gotten to the point of risking the death of someone, to get what he wants, but of course, because of the use that Alfred has for this clone, and the connection he is made with him, he obliges Robert, and gives him a name, that would lead Robert on a journey. The name, Tesla, leads him to America where he learns of the cloning machine. When he meets this “Tesla” (David Bowie), he is warned of how evil the machine can be, and even ends up leaving the facility where he kept it, warning Robert that he should destroy it. But Robert ends up ignoring this warning in pursuit of his revenge, even ending up getting Alfred accused of murder, when he kills one of his clones, during his “transporting man” act. Robert ends up sacrificing a clone of himself, or even the real him, every time he did this act, purely so he can get back at Alfred, by taking his life away, and proving that he can be a better magician.

Alfred ends up losing his wife, his child, to his worst enemy, and his own life. The thing that really ties the whole sacrifice theme together is the machine. The machine is what leads Alfred’s character to lead a double life, with the intention of having either Alfred or his clone, have the chance to perform magic, and be the “prestige”, at the end of the transporting man trick. They have to trade lives at some points, with one of them being Alfred at one time and being in a disguise at others. I believe that in a way, this shows how towards the end of the movie, Alfred actually ends up being a better person than Robert. This is despite the fact that Alfred has to sacrifice his time with his wife, when his clone is being “Alfred”, because he is doing all of this to make sure that the clone has a life of his own. And despite the fact that it is playing God to create a clone of yourself, (which is a whole different discussion), he ends up treating this clone well, and even though he does this all for his act, and even ends up making his wife think that her husband is cheating on him, he still doesn’t treat his clone in the same harsh way that Robert does. Though ultimately we still see bad things come from the fact that no one knows he has a clone, when his wife ends up killing herself, which is another case where sacrifice comes into play, though it isn’t until one version of him ends up being hanged for a death that he didn’t commit, that the other version of him realises how out of hand things have gotten. But the fact that he realises this, is what makes Alfred go from being willing to sacrifice something for an act, to believing that sacrifice isn’t worth it at all, considering how much you have to lose for it. And Robert’s being that, when his wife was alive, he believed that doing things differently is too dangerous and it’s not worth risking the life of any being, even a bird, for the magic, but when he gets so desperate to be better than Alfred, he becomes willing to kill a version of him, every time he does the act, and due to the unpredictability of the machine, he doesn’t know if it’s the real him that survives the act.

This film is left wide to interpretation, much like Christopher Nolan’s other films. This became clear when I started to wonder when exactly Alfred did clone himself. There are subtle hints that made me think about this, such as when Alfred’s wife started to say “tell me you love me another time, when you really mean it”, I thought that fact she kept saying this at some points and at others would say “now you really mean it”. I thought these lines were used when either the clone of Alfred was with his wife. That being, the real him would be around her when she says that he ‘really meant it’ but the clone would not say it in the same way, seeing as the clone had a thing for their beautiful assistant in the magic show. This led me to believe that he cloned himself fairly early in the film, at some point soon before he met his future wife, or just after he met her, because at these points he wouldn’t be expected to go away for a really long time without a good reason, as of course at later points in the film, he would be married to her.

Anyway, I think that the sacrifices that these characters make are much different to the typical protagonist in this film, mostly because both of these characters turn into the antagonist. They both sacrifice to be better than one another, and it shows what people are willing to do to be seen as the best magician, or being seeing as the most magical, showing how power, however unreal, can corrupt. This movie can make you question both of the main characters and leave you with no character to truly believe in, but in the end, only one to feel sorry for, the one who loses his daughter and his own life. That’s what’s incredibly clever about all of Nolan’s films, he doesn’t let any typical film conventions get in the way of his creative process. That is why I believe him to be one of the best directors of the modern day and think that this film in particular is definitely worth a watch.