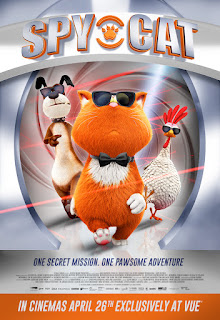 Susan Omand made some catnip flavour popcorn and watched Spy Cat, thanks to Signature Entertainment...

Why did the cockerel cross the road?

To get away from the lady chickens chasing him, because he’s more interested in meditating than in them, only for him to nearly get run over by a tractor driven by a petrified guard dog, called Elvis, who’s running away from his evil owner, narrowly avoiding an accident with a mail truck carrying a box containing a pampered house cat with a penchant for detective shows, just at the road junction where they meet a zebra that has been left behind by the circus, which means they all band together to catch burglars stealing priceless kitschy artwork from the neighbourhood…

OK that joke didn’t pan out as well as it did in my head. But it does give a neat summary about how the bold band of buddies in Spy Cat meet each other. The story centres on Marnie Sunshine, the very spoiled ginger “fur baby” of nurse Rosalyn Sunshine who lives in Drabville, East Bumblesnore. All Marnie does all day is eat (sitting at the table and with a fork) her specially cooked food (with her initial picked out in blueberries, of course) then watch her favourite detective cartoon on TV, Agent Ohura, before playing at being a secret agent and dragging her teddy pals around while looking at stuff through her toy periscope. Marnie and Roz’s routine is disrupted one day though when Roz’s step-brother Paul (introduced as “uncle Paul” to Marnie) arrives by ambulance in a wheel chair with two broken legs after an accident. He persuades Roz to let him stay with her while he recuperates. Only Paul isn’t as injured as he seems. His wheel-chair, with fake leg casts, is actually a flying machine which enable him to sneak onto people’s rooftops and zip down the chimney to burgle the place, handing the valuables out of the window to his two accomplices waiting outside. Marnie discovers Paul’s secret scrapbook of news clippings and a map but he convinces her that he’s really a secret agent trying to catch the bad guys and asks for her help. She has to go and meet a contact in a secret location that she can only get to by travelling in a cardboard box that Paul puts in the mail. Of course there is no “secret contact” – it was Paul's way of getting rid of the nosy cat – and a near accident between the mail courier and dog Elvis’ tractor causes Marnie’s box to jolt out of the van and onto the road, which is where the fateful meeting takes place. 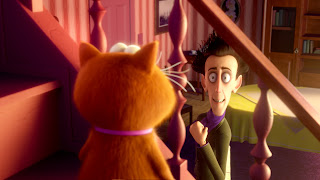 I’ll not spoil any more of the twists and turns the story takes, because there are several, but it’s all good fun and extremely child friendly, in terms of only having cartoon style violence. I think parents and older kids would enjoy it too, as there a few nods to things that will go over young kids’ heads, like a North by North West style aeroplane chase and the Mission Impossible bit, although I found some of the human characters were a bit annoying. I also found the animal characters a little cliched but, again, I have seen more than my fair share of this kind of cartoon so I may just be a little jaded. However, I thought it was a nice touch that the animals didn’t talk to the humans in the movie, only amongst themselves. And a special shout out to the sarcastic pigeons above Elvis’ yard for incidental humour.

The animation is Pixar style 3D modelling, although there’s an excellent bit of cel shaded animation mixed in, while Marnie is watching her detective cartoon on TV, and both are very well done. The story is satisfying with a few unexpected twists and turns and kept me engaged, although I admit I am not 5 so it may be a little slow-paced and involved for them, and it maybe falls between two stools a bit by not pitching quite at its target audience because of that. There wasn’t much in the way of slapstick humour and there weren’t a lot of obvious jokes to laugh at but there was a good undercurrent of humour for me to raise a smile at.

Just please don't be misled by the badly chosen poster art - that is not an image from the movie and really doesn't reflect the tone of the film at all; it's not a high-tech, all-action, comedy thriller like The Incredibles.  Instead, expect Spy Cat to be a Wallace and Grommit style caper done by the animals from Shrek or Madagascar but without being quite so laugh out loud funny, and you’ll enjoy it.