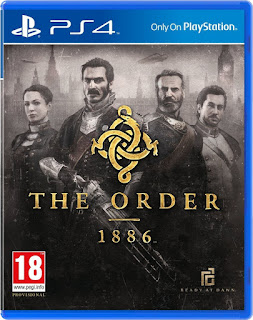 Sometimes you stumble across something that you were not expecting but that speaks to you on a weirdly personal level. As someone who loves all things genre, vampires and werewolves specifically, I am always on the lookout for something in that vein. One fateful Saturday, I was wandering around my local used game store and came across The Order: 1886. Although this game came out in 2015, I was somehow not aware until recently.

This is an incredibly short game, probably right around 10 hours, but it is great fun. The story follows an 1886 incarnation of the Knights of the Round Table, who, aided by Nikola Tesla, fight the half-breeds (werewolves and vampires) and anti-government insurgents who have invaded different aspects of life in 1886 London. This London is a reimagined, Steampunk laced London with gears galore. The story follows Sir Galahad and his team of Knights as they traverse 19th century London in search of rebels and creatures to destroy. When his mentor is destroyed in a terrorist attack, Galahad begins his own search which will uncover deception and betrayal amongst his own ranks.

I don’t want to give too much away but let me just say at the outset that I truly enjoyed the game. There are issues I have with the setup and plot and I will get to that in a minute but I want to lead with how enjoyable the game truly was.

Visually, this may still be the most beautiful game I have ever played. Although it is now four years old, this game rivals anything I have yet seen on the PS4. The environments and motion capture of the characters is unmatched. I spent a lot of time just looking around at the detail which looks as good as anything that has come out recently. The voice acting is also spectacular. Everything about the game’s production is damn near perfect. If you want something immersive and interesting and you are into anything Victorian, this game is something you must experience. 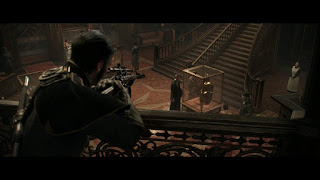 That being said, the game is far, far, FAR too short. There are threads here that the game creators could have unravelled which could have tripled or even quadrupled the game time. Just as the player unwraps a layer and we see what could potentially stretch into an entirely new story arc, the blinds are pulled back up and we are sent onto the next linear plot point. While I didn’t expect a completely open world format, I would have enjoyed some freedom in that regard. The game itself keeps you on one singular path and you have next to no ability to diverge from that path.

Now personally I am not a fan of shooters of any kind, unless it is strictly sniper based. I find that shooter games, whether they be first or third-person, always become dull and uninteresting as every battle is relatively the same. That being said, although this is a third-person shooter, the mechanics work so that the game doesn’t get bogged down in those clichés. When moving from cover to cover, the player has to replenish ammunition, switch weapons accordingly, and trade between incendiary grenades, handguns, rifles, and machine guns. The switching paradigms help keep the system from becoming boring.

Overall, the game is a fun, quick play through. If you are wanting something complex or difficult, something that will provide hours upon hours of entertainment, this game is not the right choice. If however, you want to find something fun and immersive, but quick and to the point, you should really give The Order: 1886 a shot. It is a lot like a high school crush: it is unbelievably gorgeous, but once you really dive into the relationship, you understand it isn’t all that deep. Pick this up cheap, enjoy a few hours of glorious environments and incredible motion-capture and voice acting, and try not to be too disappointed by the lack of freedom or the storylines that seem to dwindle before they develop.