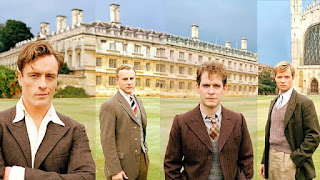 In a series of articles, Susan Omand and Steve Taylor-Bryant are going to remember the policemen, spies and criminal specialists that entertained them over the years. Today, Steve goes to Cambridge...

I am a sucker for all things espionage. I have loved spy stories since I was as young as I can remember, old Michael Caine films with my granddad, the original Berlin Game, Mexico Set, London Match with my dad (my reinvented modern-day version is here), and then the discovery of real-life spies starting with one of our most famous traitors, Kim Philby. I have consumed book after book on the subject, both fiction and non-fiction, and as much television as I could manage with a real life that gets in the way of watching things. No matter whether it was the Spooks TV show, or a book like The Company, it was Philby I kept coming back to. The problem is a lot of pop culture doesn’t cover all the aspects of a convoluted story like becoming a double agent, deciding in the main to glorify some action plot point rather than the slow, and often painful process of proving yourself. Pop culture also tends to leave real life traitors alone, maybe scared to take on something real and provable. Philby appears in, well, not as much pop culture as maybe somebody so large in the life our intelligence service should. In fact, the only decent shot on television about Kim Philby and the rest of the Cambridge Five - Donald Maclean, Guy Burgess, Anthony Blunt, and John Cairncross - was the 2003 BBC four-part drama Cambridge Spies and that’s what I have watched this week for Watching the Detectives.

Directed by Tim Fywell and written brilliantly by Peter Moffat, Cambridge Spies concentrates on the four of the five that were recruited by Russia whilst still at university in the 1930’s. The famous four were perfectly cast by some of the most talented actors of my generation. Anthony Blunt was played by Samuel West (Howards End/Van Helsing). Blunt was a distant relative of The Queen and West played that upper-class reserve perfectly although a little more real emotion wouldn’t have gone amiss West played the character as I’d imagined the character to be, so I guess that’s a big compliment. Son of a government minister, Don Maclean, was the most nervous of the group and from my research probably not the brightest and very easily led, and after seeing Rupert Penry-Jones (Spooks/Whitechapel) play that weaker man I was left wondering if there was anything Penry-Jones couldn’t do. Most definitely one of the best actors this country has produced in many years. The, I suppose, most important one of the groups was undoubtedly Philby. He was by all accounts as devious as he was charming and the most intelligent of them all and from my own reading and research Philby was the one most committed to the cause of Communism, the others more attracted by the allure of being different. Playing Philby can be hard thing to master but I thought Toby Stephens (The Machine/Black Sails) played all the contradictions of Philby’s character extremely well and was the glue that held the group together, a group that left under the guidance of Guy Burgess would have ended up in jail or dead long before spying was the issue. Burgess was a heavy drinker, a party animal more at home in men’s bathrooms coming on to strangers than he was in a classroom. Burgess was a force of nature, a man who was so enigmatic and witty and charming he could have got anyone to do anything and did often. Enter one of my favourite British television actors of the last couple of decades Tom Hollander (Rev/Baptiste) who completely stole the scene every time he was on screen. Hollander demands your attention no matter what part he is performing, and he is the most perfect piece of casting ever in a show.

The timeline and stories were slightly askew at times, for what felt like flow reasons, but not enough to annoy and with great dialogue, fantastic make up for the ageing process, and acting of the highest quality, Cambridge Spies is one of the best true story espionage shows ever produced. This is what The Company should have been, although the highlight of that show was also Hollander, and this should maybe become the template for future espionage biopics.