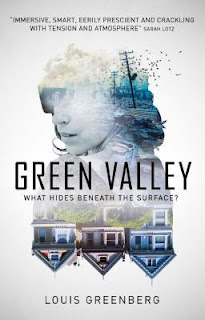 When Lucie Sterling’s niece is abducted, she knows it won’t be easy to find answers. Stanton is no ordinary city: invasive digital technology has been banned, by public vote. No surveillance state, no shadowy companies holding databases of information on private citizens, no phones tracking their every move. Only one place stays firmly anchored in the bad old ways, in a huge bunker across town: Green Valley, where the inhabitants have retreated into the comfort of full-time virtual reality—personae non gratae to the outside world. And its inside Green Valley, beyond the ideal virtual world it presents, that Lucie will have to go to find her missing niece.

If you’d have pitched me this book about three or four years ago, I’d have thought you were insane. Nobody is going to vote to cut their nose off to spite their face. Nobody is going to be in a position where they are vehemently opposed to family member, friend, loved one. Nobody is going to be so afraid of what their data is being used for that they’d rather not have technology. Then you realise you are now post-Snowden, post-Cambridge Analytica, you are post-Brexit and all of a sudden, this book has taken a sharp turn towards the frighteningly real.

What was once too fantastical a premise is now the basis for a taut and edgy thriller in which Greenberg seems to relish twisting in your mind. The stark contrasts he uses in describing the town minus its technology, and what life is like when you’re plugged into the virtual reality of the I, are quite incredible but as the story goes on the harsh realities of both start to mingle and there is a horrific overtone to everything. Add in the emotional pull of tragedy with the deaths of children and more children missing and Green Valley becomes so intense to read.

I will admit I wasn’t expecting much from Green Valley. I didn’t think the Turn which led to the split would be real enough for me, I’m not a fan of plot points I can’t put myself in, but Greenberg has positively frightened me with how realistic his setting became. Green Valley is a stunning thriller, a tense story, a horror, but it’s also a well-played out detective tale in a world of what could have been. Utterly brilliant.