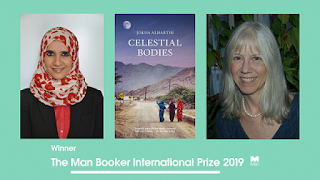 Celestial Bodies, written by Jokha Alharthi, translated by Marilyn Booth from Arabic and published by Sandstone Press, has been announced as the winner of the Man Booker International Prize 2019...

The winner was announced by award-winning historian, author and broadcaster, Bettany Hughes, at a ceremony at the Roundhouse in London.

Jokha Alharthi, the first female Omani novelist to be translated into English, is the first author from the Arabian Gulf to win the prize. The author of two other novels, two collections of short fiction and a children’s book, her work has been published in English, German, Italian, Korean, and Serbian. An award-winning author, she has been shortlisted for the Sahikh Zayed Award for Young Writers and won the 2010 Best Omani Novel Award for Celestial Bodies.

Marilyn Booth is an American academic and translator who has translated many works of fiction from Arabic. A fellow at Magdalen College, Oxford, she holds the Khalid bin Abdallah Al Saud Chair for the Study of the Contemporary Arab World at the Oriental Institute.

Celestial Bodies tells of family connections and history in the coming-of-age account of three Omani sisters. It is set against the backdrop of an evolving Oman, which is slowly redefining itself after the colonial era, at the crossroads of its complex present.

Celestial Bodies was selected by a panel of five judges, chaired by Bettany Hughes, and made up of writer, translator and chair of English PEN Maureen Freely; philosopher Professor Angie Hobbs; novelist and satirist Elnathan John and essayist and novelist Pankaj Mishra.

Bettany Hughes said, ‘A book to win over the head and the heart in equal measure, worth lingering over. Interweaving voices and timelines are beautifully served by the pacing of the novel. Its delicate artistry draws us into a richly imagined community — opening out to tackle profound questions of time and mortality and disturbing aspects of our shared history. The style is a metaphor for the subject, subtly resisting clichés of race, slavery and gender. The translation is precise and lyrical, weaving in the cadences of both poetry and everyday speech. Celestial Bodies evokes the forces that constrain us and those that set us free’.

The Man Booker International Prize was originally established thanks to the generous extension of funding given by Man Group. The 2019 prize marks the final highlight of their successful 18-year sponsorship of the prizes. The £50,000 prize for this year's International winners has been divided equally between its author and translator. Each shortlisted author and translator also received a further £1,000 for being shortlisted.

Luke Ellis, CEO of Man Group, added his own commendation saying, ‘On behalf of Man Group, I would like to congratulate Jokha Alharthi and Marilyn Booth, as well as each of the shortlisted authors and translators. As one of the first literary awards to celebrate the work of international authors and, in recent years, to celebrate fiction in translation, the Man Booker International Prize plays an invaluable role in encouraging a diversity of voice in fiction worldwide.

‘As our sponsorship of the Booker Prizes draws to a close, I would like to take this opportunity to recognise the commendable work of the Booker Prize Foundation and to wish them the very best for the future. Diversity will remain an important area of focus for Man Group as we concentrate more of our resources on our Paving the Way campaign, which aims to enhance diversity and inclusion at the firm and across the investment industry, as well as continuing to support charitable initiatives that promote literacy and numeracy.’