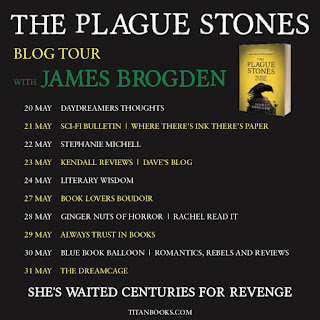 We're honoured to be the final stop of Titan Books' tour for the newly published horror novel, The Plague Stones. In an exclusive article for us, author James Brogden talks about xenophobia and Trust Issues...

In ‘The Plague Stones’ a mob of undead fourteenth-century peasants attacks the family home of Trish Feenan, who is the newest Trustee of an exclusive and privileged village neighbourhood. Trish hasn’t done anything to deserve their vengeance, nor has her son Toby or her husband Peter. As a matter of fact, they’ve been tricked into this situation, so have even less reason to share in the responsibility for what happened to these people centuries ago.

The thing is that the mob’s leader, Hester Attlowe, doesn’t care. Trish belongs to the Trust, and the Trust committed an unspeakable evil against her village, and the Trust must pay. It’s a cruel, Old Testament mindset, with no place in the civilised, modern world.

So far, so Walking Dead. If all you’ve come here for are the zombies, then I will shake your hand, friend, and leave you here.

Because it’s happening all around us, and it’s getting worse.

One of the hardest things about writing this story was trying to understand a medieval religious world view in which original sin features heavily – the notion that one is born sinful, it is incarnate in your very flesh and bones from infancy, and you didn’t do anything to deserve it but if you don’t get straight with the Lord you are damned anyway. It sits hard with a more contemporary notion that the Lord is eternally forgiving rather than the vengeful Yahweh who visits the sins of the fathers unto the third and fourth generation regardless of their guilt or innocence. We like to think that we are defined by our actions, and expect to be judged accordingly, not arbitrarily according to the random happenstance of when and how we were born.

And yet we are currently seeing a pandemic of racism, antisemitism, Islamophobia, homophobia and general neo-Nazi bigotry fostered by corrupt demagogues in hand with complicit social media platforms, which stems from the same cruel, Old Testament mindset that you are judged by what you are: your religion, language, gender, culture or skin colour. Pretty much all forms of hate crime are on the rise, our kids are stabbing each other in the streets and our politicians are tossing words like ‘traitor’ at each other while wondering why they’re being targeted by murderous fascists. Are you a Brexiter or a Remainer? Don’t you want to Make America Great Again? Oh, you’re one of those.

For me, one of the most blatant examples of the deepening entrenchment of social divisions was the Grenfell Tower disaster. It may not have been premeditated, but it was a crime nonetheless, and it happened to some of the most underprivileged people in a borough with the most extreme gap between rich and poor in the entire country.

On the 14th of June 2017, a malfunctioning fridge-freezer on the fourth floor caused an electrical fire which spread to the building’s exterior cladding, turning the floors above it into an uncontrollable inferno and ultimately killing 72 people. Government ministers had been warned about cladding of this type, which had already caused one fatal fire, but refused to discuss the issue with fire safety authorities. The residents had repeatedly voiced their concerns about substandard fire extinguishers, lack of sprinklers, blocked fire escapes, and exposed gas pipes – but the company managing the building did nothing, while the government suppressed the safety report and the council threatened to sue a blogger who exposed these shortcomings. The vast majority of residents in the tower, including those that died, were from ethnic-minority communities and this happened against a background of pro-Brexit xenophobia, deregulation of basic community services and ‘austerity’. But of course austerity is over now, isn’t it? It’s all blue passports and sunny uplands from hereon in.

Grenfell tower was a twenty-four-storey funeral pyre for our cosy illusions about how great Britain is, or how united our Kingdom. It illuminates everything that’s wrong about the way those with power treat those without, and its fire should be scorched onto the retinas of every minister or bureaucrat who thinks it’s okay to shave a few pence off the cost of replacing a fire door, and every comfortably upholstered middle-Englander who decries the awfulness of so many immigrants taking jobs and benefits, despite residing nowhere near the big cities where the immigrants actually live and work and enrich our society with their music, food and culture.

And in case you think this is a tragic but isolated case, property developers of multi-million-pound housing developments continue to segregate the children of less well-off tenants from those of wealthier home buyers by blocking them from communal play areas, and build ‘poor doors’ to prevent them using the same entrances as their better off neighbours. It is medieval, almost feudal - a world of privilege and lazy, unthinking bigotry which a fourteenth-century peasant girl might recognise all too well.

In ‘The Plague Stones’, the crime for which Hester exacts unceasing vengeance is the massacre of her village by their neighbours, who were terrified that they would spread the Black Death. But almost as bad was the way in which those neighbours closed their village first, patrolling their parish boundary with lethal force and denying Hester’s people the refuge which they had a right to expect. Hospitium is a tradition older than Christianity, and the punishment for violating it is implacable.

‘Why are you doing this?’ Trish sobs. ‘I don’t understand! I’ve never done anything to you!’

To which Hester sneers: ‘You think your deeds matter in the slightest? You think your ignorance excuses you? It does not matter what you have or have not done. The moment you joined the Trust you took share in the guilt of their forebears, the ones who murdered my people.’

It is a terrifying wake-up call for a member of the privileged class to realise that she is being judged and condemned simply for what she is. It is something which too many other people in our society live with on a daily basis.

All of this is a none-too-subtle metaphor for the global spread of isolationism and nationalistic xenophobia. Our own particular localised outbreak of this disease is, of course, Brexit – that cultural psychotic breakdown instigated by one criminally complacent prime minister for the narrowest and most selfish of political reasons and perpetrated by another who is either too fanatically bloody-minded, or simply lacks the imagination, to come up with an alternative, take your pick, the result being that there are communities in this country who can trace their relationship with Europe back to the Bronze Age turning their backs on people with whom they share their very DNA. It is a toweringly stupid act of social, political and economic self-immolation.

It took European civilisation a generation to recover from the Black Death. I shudder to think how long we’ll be suffering the consequences of this newest, oldest disease.

But hey, it’s just a bunch of zombies, after all.

Thank you again very much to both James Brogden and Titan Books for allowing us to share this fantastic article. The Plague Stones was published on 21st May.