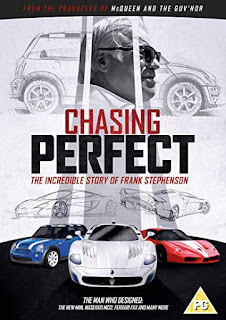 Out on digital and DVD this month, and not just a documentary for petrolheads, watch the trailer for Chasing Perfect...

Chasing Perfect is the untold story of Frank Stephenson, the extraordinary man who revolutionised the Mini and was design director of some of Ferrari's and McLaren’s most iconic cars. As one of the most influential designers working today, the film tracks through Frank’s groundbreaking designs and the story behind them. From high-end hypercars, such as the Maserati MC12 and the McLaren P1 to the re-imagined MINI and Fiat 500, and through to his current revolutionary design of flying taxis.

The film, made by Helena Coan, focuses on Frank’s famed designs and the development of his most prolific cars. Alongside the machines, we discover the story of someone who has faced huge challenges and losses on his remarkable journey, a man whose unrelenting enthusiasm and extreme, obsessive dedication has led him to succeed in an incredibly competitive industry, and a person whose imagination and almost childlike awe of the world enables him to change it.