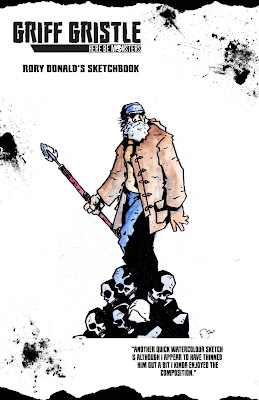 Griff was born out of a mutual love of sea faring adventure, old bearded men and big pointy spears. He's the product of almost endless conversation between myself, Mike and Rory. A fully formed character with a complete backstory, lineage and more. He's Ahab, Quint, Barbarossa, Constantine and Steven Strange all rolled into one angry, punky, bearded man with a spear to grind and spells to cast. He's the dark defender of the deep reluctantly called upon to investigate the realms of maritime mysticism. He's angry. He's you. He’s us.

I grew up by the sea. In Lowestoft, the furthest point east you can go in the U.K. I used to marvel at the fishing boats pulled up on Kessingland beach and explore the shingles of Pakefield with my friends as we went past the Jolly Sailor pub, past the cliffs which had eroded into the sea (in the early 1900s, great swathes of the coastline fell into the sea, promoting the occupants of Pakefield to move the primary school brick by brick) and see All Saints & St. Margaret's Church rising up above the cliff line. I remember the smells, the grit in the air and the great storms which battered the sea fronts on many occasion and think of all the brave souls who’d look the sea dead in its swirling blue/green eyes and dared it to blink first. Then, moving to Cleethorpes as an adult, I got to research about the area's fishing heritage and was reminded daily of its sad decline as the old port area stood rotting, the town of Grimsby still reels from the loss of the majority of its fishing fleets today.

The sea has always played a huge part in my life, now, landlocked in North Yorkshire, I often wish to go back and someday might. 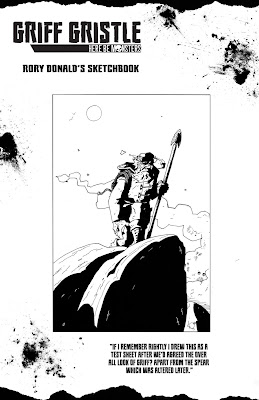 MIKE: I’m more of a landlubber myself and can’t really claim to have spent all that much time by the sea, but I have always had a fascination with water in general. My experiences of the sea are limited to occasional holidays and even more occasional cruises but it could be this unfamiliarity that’s actually the root of my fascination. As a kid I always loved to swim and I was never happier than splashing about whether it was in a paddling pool, local swimming pool or even the bath. Once I’d figured out the basics, and when I say basics I mean VERY basics of underwater swimming it felt like a whole new world had opened up to me and I was hooked. I wanted to be at the swimming pool as often as possible and would love just holding my breath, forcing the air out of my lungs, slowly floating to the bottom of the pool and then just sitting there until my lungs burned for air. Armed with nothing more than a pair of goggles and my imagination I used to love just being in that world. There is a peace under there and yet, you’re in constant danger. There is a silence down there and it’s deafening. It is a world of contradictions and something about that speaks to me. So much so that for a solid few years of my life I would refuse to go into the bath without a snorkel. Yes, the bath. Yes, a snorkel. I never said I was a normal kid. 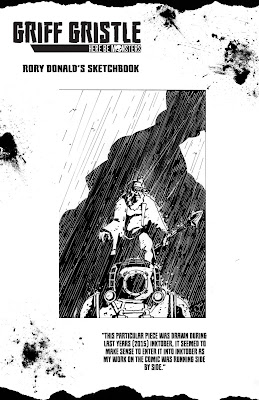 ROB: Mike and I had been writing together for a while when he came up with the idea of a crusty old man who used spells and a big ass spear to wreak vengeance on the spirits of the sea. Initially conceived as a 9 page short, we decided that Griff, his story and journey deserved much, much more. And thus, Here Be Monsters was born. Drawing influence from many different nautical legends, myths, fables and takes, Mike and I started to draw up a plan as to how we saw Griff’s world expanding. The idea of him being haunted and driven by the loss of his wife, his deep love of his boat (lovingly named after his lost soulmate) and his dark, brooding and sometimes abrasive characteristics soon slotted into place. 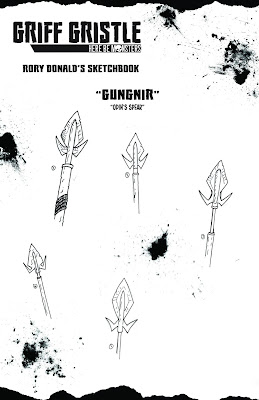 MIKE: Yeah, once we started chatting about Griff and the world he inhabits everything just started clicking into place. We’ve got some really fun surprises up our sleeves and we honestly don’t think people will be expecting where we’re going next with the story. One of the things we loved most about Griff and his world was the isolation. Generally with horror and supernatural stories one of the hardest things is getting your characters into a believably isolated situation. To create tension and claustrophobia you need to close off the escape hatches for your characters as much as possible. Mobile phones, jumping in a car, running away in general, all are options the majority of the time in the majority of situations. BUT, on the open water, you ain’t got anywhere to hide. Under the water, you’ve got even LESS places to hide. There is such a rich tapestry of mythology that covers the open water and there was so many cool things for us to reference and take inspiration from and as soon as we started playing in that sandbox we knew we were onto something very cool. Generally in stories like this the main character is comfortable and in his element. Constantine, for example, is a human and he is often fighting demons-from-elsewhere on his home turf. Usually the hero of the piece has the home field advantage. We wanted to flip that. Griff is ALWAYS out of his element, ALWAYS at the disadvantage. We thought that would create a unique dynamic that would be a lot of fun to explore. 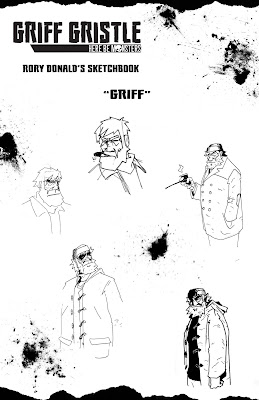 ROB: That’s right. Then, once we had all the pieces of our story, we needed an artist. Someone with a distinct and bold style. Someone who can handle the crazy, huge moments and the smaller, more subtle ones as well. Someone like...Rory Donald a.k.a Reach Illustration. Rory breathed life into our crusty old fisher punk, creating a dogged, determined old salty sea dog. Who better to explain the inspiration that goes into creating Griff, than the man himself… 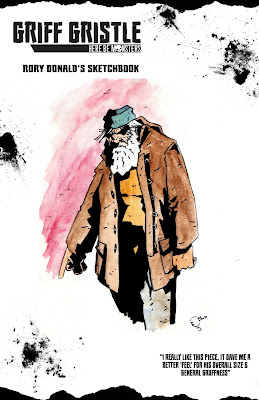 RORY: My biggest influences come from a very long and well used list of greats; from King (Jack) Kirby, Frank Miller and John Romita Jr to name but only a few, as I'm sure are a lot of people's. However, the guys who get my noodle bubbling and are the ones who I have to remind myself to breathe whenever I see they have anything out that I haven't already devoured, are Mike Mignola & Gabriel Bá. I was actually very late to the Mignola party and only really came across his wondrous works through Bá’s work first. From Umbrella Academy when I first came across Bá, I was slammed by an atomic elbow...there's just something so stunning and alive about his work.

When approaching a Griff script, I usually get straight into printing it off so I can scribble down any ideas & doodles for the panels that pop into my mind as I read them. Once I've done that, it's a panel layout moment where I try and create a flow for the eye across the pages and fill in with some VERY basic thumbs. Next up comes the rough layouts (all this is on paper) before moving into the blue pencils on comic book art boards, it's here where currently I've then scanned these pencils in & inked on the iPad Pro...however I'm still experimenting with this technique as I love the look of old timey fully inked pages. All the colouring I do with clip studio on the Mac. To be honest I prefer working in black & white but the whole colouring stage is becoming very interesting.

Huge thanks to Rob (@RobJonesWrites) Mike (@Rapiaghi) and Rory (@imnotdaredevil4) for their time and generosity with this article.


Now it's your turn to be generous and GIVE to the crowdfunder for the latest Griff Gristle: The Endless Voyage! Read Susan's review of  the other Griff Gristle comics - Here Be Monsters and The Siren's Song.