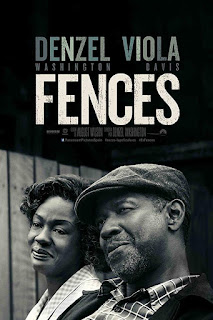 Some actors' work guarantees a box office hit, winning awards and critical acclaim, with films that everyone has seen. Everyone, apart from Susan Omand. So we set her homework to catch up. This month it's Fences and Viola Davis...

I don’t normally watch dramas. I've always found them difficult for me to engage with as I’m not a people person, I couldn’t connect or empathise with the characters on screen and usually end up getting bored and wandering off before the credits roll. This film has changed that.

I sat, in one place, for two and a bit hours, immersed in a situation that I had no personal connection with, invested in a family that I knew nothing about, living in an era that I had only read about in history books. And I was made to care. I cared about the characters; about Troy and his impossible circumstances, fighting against a lifetime of bad decisions and a system where the odds are stacked against him, with a chip on his shoulder and bitterness in his heart; about Cory, living constantly in his father’s shadow, with the weight of traditions, fear of stepping out of line while constantly wanting to flourish and rebel; about Lyons, trying his best to make his way in the world, treading a thin line with only his music to get him up in the morning; about Gabe, wonderful, damaged Gabe, who chased hell hounds from the gates of St Peter, picked fruit and flowers and scared the neighbours; and about Jim Bono, Troy’s closest friend, his conscience, his father figure, his own gentle guide.

But most of all I cared about Rose. In any other hands, the role of Rose would have become that of a victim, beaten down by battling a wilful family, cowering from a too strong husband and generally being walked all over and taken for granted. In the hands of Viola Davis, Rose became the rock at the centre of that family’s world. The strength of that woman was astounding as she bore the brunt of everything that got thrown at her without ever losing her poise, her grace or her compassion but also by never allowing herself to become either domineering or doormat. She supported her family when they needed support, accepting what could not be changed but she also courageously stood, and in some cases took back, her ground when those around her took advantage, no matter what the consequences. I cared about Rose because Viola Davis made me relate to her.

My god, she can act. Anyone else, ANYONE, male or female, would have been dwarfed by the magnitude of the powerhouse performance given by Denzel Washington as Troy, whose monologues were just astonishing. Instead she shone out as a true equal to that acknowledged Hollywood heavyweight, sharing the screen with assurance and aplomb, never fighting for her time in the spotlight but neither did she shrink from it. Never mind Best Supporting Actress, she should have picked up the best Lead for Fences, and then get every award going from now on.

Yes, Steve, you can count me as educated this time and thank you for making me step outside my comfort zone in more ways than one with Fences. Rest assured that I will look out for films with Viola Davis in now, no matter what the genre, safe in the knowledge that a strong, and relatable, character awaits.