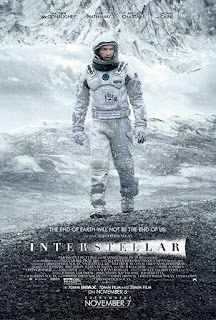 Our own stellar Kraig Taylor-Bryant takes a look at Interstellar (with major spoilers)...

With the stresses of studying film as a course in college comes a lack of confidence in the area, when a deadline approaches, or you start to believe that an idea just isn’t working. Interstellar was one of those films, again, by Christopher Nolan, that serves as a reassurance that film is a truly magical thing, and something truly worth working hard to bring to life. To me, he is currently the most inspiring director in the industry, which is what made me pick out this movie.

Set in a future where the world is starting to become uninhabitable, the film is about an ex-NASA pilot, Cooper, played by Mathew McConaughey, who finds a secret NASA base, years after he’s left the line of work to start a family and work as a farmer. After discovering this base, they are introduced to the current programme that NASA is undergoing, thanks to his intelligent daughter Murph (played by Mackenzie Foy during the character’s younger years) and the ghost that she believes to live around the bookshelf in her room. In this programme, a number of scientists were sent out into space to explore a wormhole that appeared near Saturn, their mission was to look for more habitable planets for the human race. It’s interesting that there are two plans as to how the human race could live on, there would be plan A, which would involve figuring out how to make their current base, act as a space station, for the current human race to be transported into space.

What’s fascinating about this film, as with all of Nolan’s films, is that he will put something into the film that you won’t think too much of during the first watch but, when you get to the plot twist or the climax of the film, you will look back on those previous moments, perhaps during a re-watch or just at the end of the film, and understand why certain actions were made, or words were said, by characters. In films like Memento, because the whole film is backwards, we don’t understand why he intends to hurt/kill someone who, as the film goes on, seems to be the guy that the main character and audience should trust, but as the movie goes on further, we start to understand why he would distrust him, and we understand how the protagonist sets himself up, to go after him.

In this film, the big reveal is the moment when Cooper, after an incident during his space mission, ends up in a strange wormhole/black hole of sorts, in which he’s actually able to interact with the past, through his daughter’s bedroom (his daughter is played by both Mackenzie Foy and Jessica Chastain) though he cannot directly talk to her. Anyway, this is the moment that reveals that the “ghost” that his daughter believed to be in her bedroom was in fact her father in the future, and all this time when he was interacting with her, warning his daughter that she shouldn’t let her father go on the space mission, is because his future self knows that he won’t get to watch his daughter grow up.

This moment also explains other scenes, such as when one of his co-pilots, Brand (played by Anne Hathaway) interacted with something that’s not really there, in the space ship, because essentially, he can somewhat interact with moments/places within his own history. This is a part of the film that still confuses me somewhat, but this moment explains what his co-pilot was interacting with, the presence of Cooper’s future self.

The thing that really emotionally invests the audience in these characters is that we get to see the perspectives of all the characters in this film. We get to see how the Cooper’s son, Tom (played as an adult by Casey Affleck and a younger version by Timothée Chalamet) continually believes that their dad will come back some day, and so decided to start his own family in that same house that they grew up in, in the hope that he will come back. This character is also interesting because it gets to a point where because his sister (at this point played by the older, Jessica Chastain) sees the reality of their planet and he doesn’t, that it’s clear that the son loves his dad too much to let him go, and the daughter has given up, because she can’t help believing that their dad may have left them behind to die on the planet, so she has to take matters into her own hands to encourage her brother (who is played by his 'older self', Casey Affleck) to leave the farm, because the air is becoming to harmful/toxic for his family, and Tom is ‘holding on to their dad’, essentially, and he can’t see how it’s affecting his own immediate family. 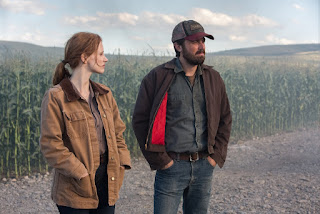 Of course, as I said, there is a clear contrast between the main character’s son, Tom and his daughter, Murph. The fact that we hardly ever see Murph in the transmissions from Earth to the shuttle going through the wormhole, shows us that she really doesn’t want to communicate with her father because of the fact that Cooper doesn’t really believe in the ghost in her room. The fact that she ends up being right about this ghost is what really makes us change what we think of her, and we start to understand why this character is so mad at her father. She isn’t mad because of some lie that she made up, and she’s not just feeling stubborn because she loves her dad. Somehow, she became positive that her dad wasn’t going to come back, and the moment that he left, she believed, and was almost certain that she was never going to see him again, so it was easier for her to let him go, out of spite. One of the only two times that we do see her make a transmission from Earth is the time when Murph (who at this point would be played by Jessica Chastain) has just turned the same age that her father was when he left. And she does this because Cooper said to her that he may even come back when they’re the same age, so I think at this point she wanted to prove to him and maybe even herself, that he’s not really going to come back, and she knew all along.

The other time that she does communicate with him, whilst he’s away, is out of hatred, because she’s been told by her mentor, who’s also one of the lead scientists at NASA (played by Michael Caine), that plan A was never really going to work, because he could never get the equation right, which he tells Murph (who, at the end, is played as an older lady by Ellen Burstyn) on his death bed. When doing so he also mentions that he kept telling everyone about how plan A was going to work someday, so that he could get people to work for him, to get plan B underway, because at the end of the day, people have the interests of their own families at heart, and not “the bigger picture”. Which is very true, and somewhat ironic, because it almost seems like it’s the humanity in us as a race, that would stop us seeing the bigger picture.

Anyway, when Murph does contact her father the second time, she does this because she believes that her father knew that he wasn’t coming back. Now, this is one of the moments that makes it all the more obvious that she wants to push her father away. This is because, at heart, she should know that her father loved her, because of the way that he treats her during the early minutes of the film, but Murph chooses to discard those memories because she doesn’t want to slowly mourn for someone for the rest of her life. I think that’s one of the cleverest parts of this concept, the fact that you can never really mourn someone who could be alive or dead, especially when, in this story, time works completely differently when you travel through a wormhole.

It does become clear though that Murph doesn’t have to hate him anymore, when Cooper finds a way to communicate with her, through this weird black hole/phenomenon that he’s stumbled into, because essentially he, alongside his robot assistant, can make calculations in this place, that would help solve the equation for “plan A”. When Murph realises that her father can communicate with her, that her father was trying to communicate with her all this time throughout her life as this “ghost” she believes in, she opens her heart to him again, because essentially, he’s actually been there for her all this time. And when he starts to give her hope that they could actually save the current human race, she starts to believe that she could see her father again, so sets aside her hatred of him, and begins to hope that they will see each other again, which of course they do by the end, though because of the amount of time it takes, Murph has to be put into “stasis” of sorts, so that she may be alive to see him.

I think in that major moment of the film, the moment when the main character realises that he is his own child’s imagined ghost, it becomes clear that this is a very essential theme of time in this film, and we could even see this film as a message to spend all the time with any kids you have or may have in the future whilst you can, because to us, it may seem like only yesterday that they were only 10 years old, like the daughter of the main character in this film. Of course, you can look back on the moments of your past, which in our case would be through video or recordings or photographs, but you can’t interact with it. You can’t tell your younger child in person how much you love them or spend time with the younger version, you can only look back on what you did, or didn’t, do.